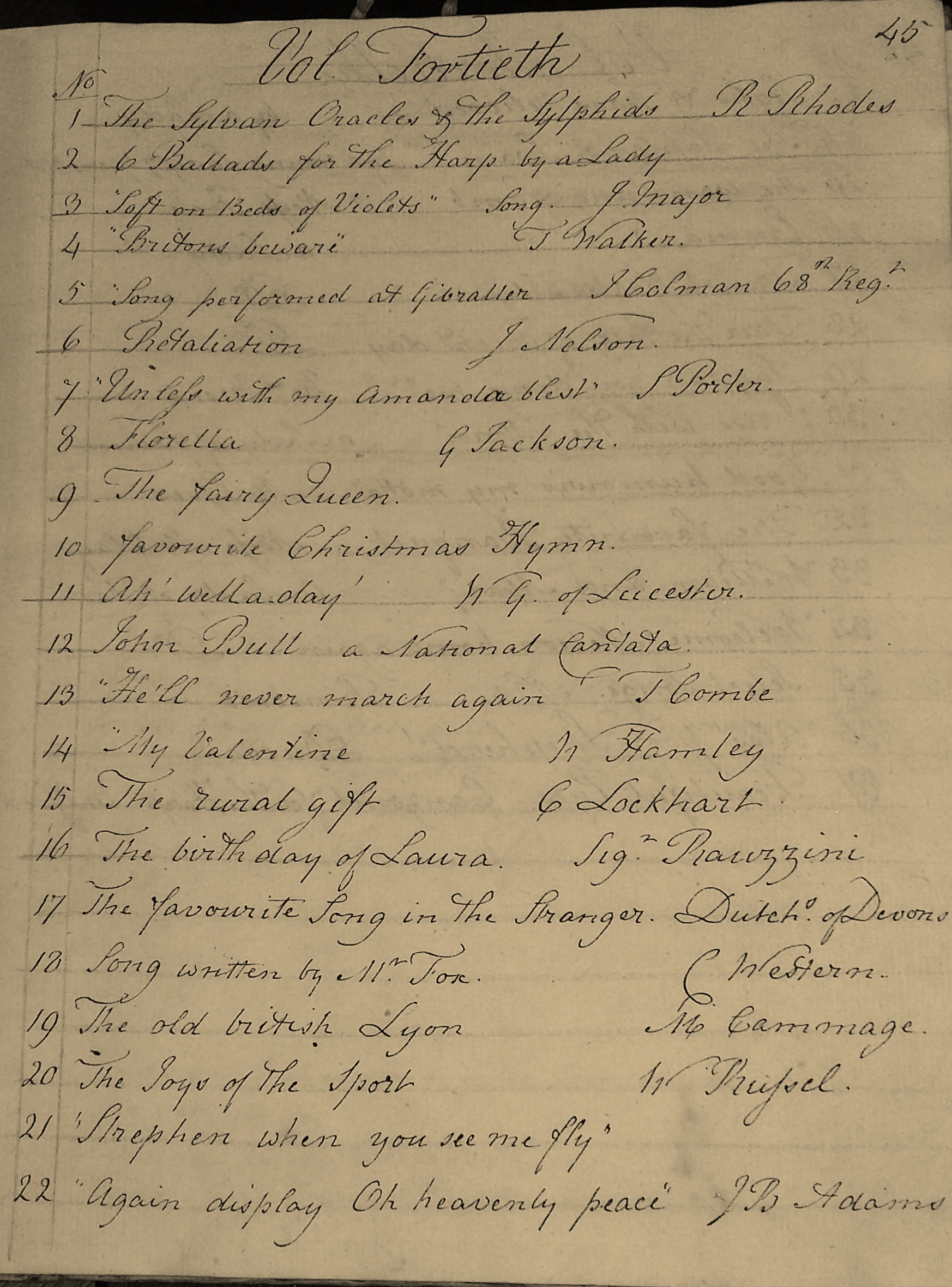 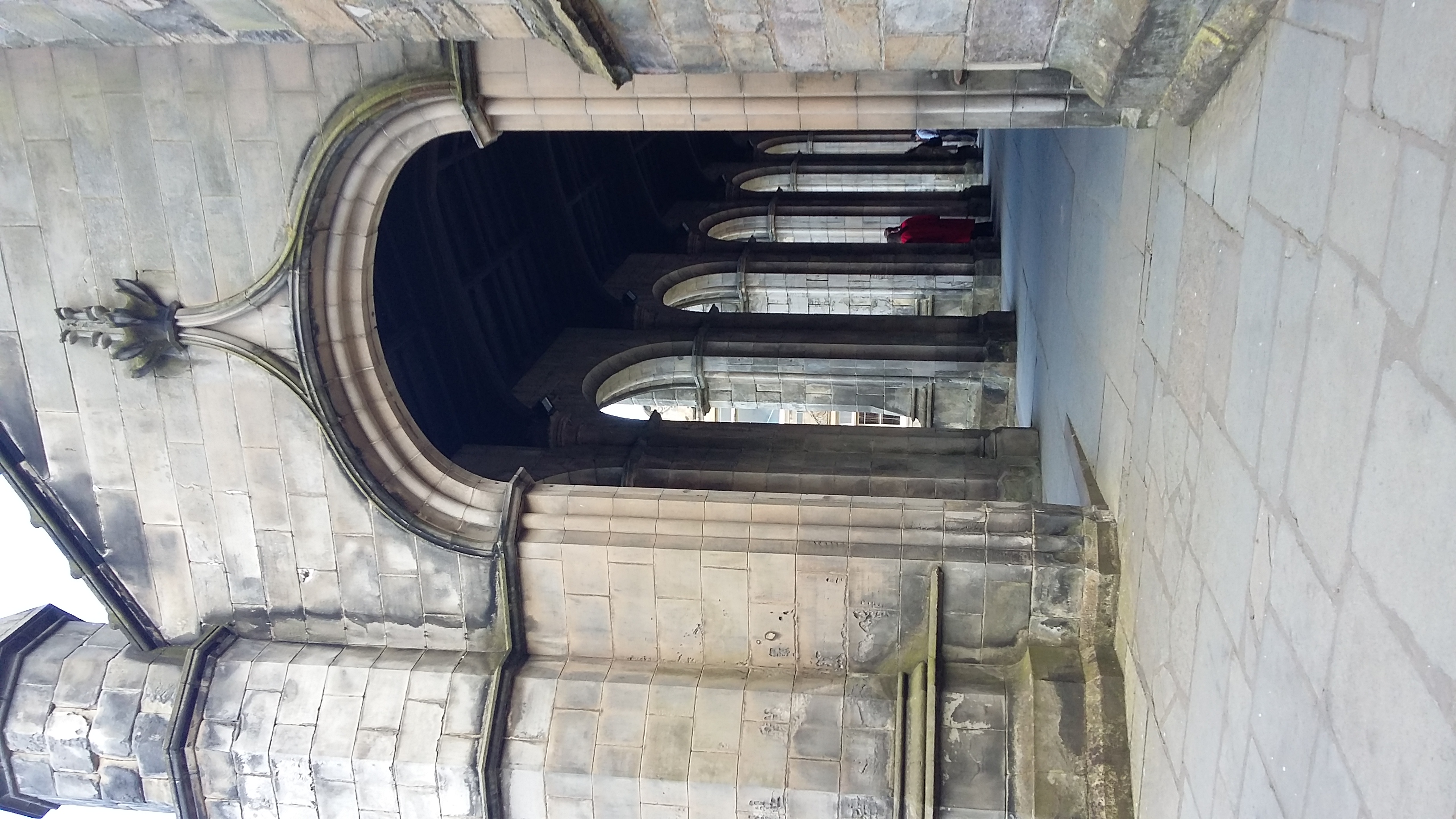 In 1801, the University of St Andrews started binding a backlog of legally deposited sheet music.  Music was roughly sorted into volumes for voice, piano or instrumental ensemble; binding became a routine practice over the subsequent three and a half decades. The music was to become a popular commodity for the professors and their friends; less so for the teenage students. One or two boys did borrow music heavily – the mother of one was known for her musical soirees, so he was possibly borrowing for more than his own amusement.

Women’s contemporary interest in the music collections is noteworthy. Since professors were at one point reminded that readers should not visit the library shelves unattended, it seems likely that professors either borrowed music with their friends in attendance, or selected volumes that their friends might enjoy. With no complete music catalogue until 1826, it is not unreasonable to imagine professors responding to requests for the latest songs, piano or harp variations. From that point, Miss Lambert’s music catalogue was clearly a boon; indeed it was even signed out by borrowers on a couple of occasions.  I should stress that Miss Lambert was paid a tiny sum for producing the music catalogue; there is no suggestion whatsoever that she was an employee.

The numbers of women borrowing music by proxy rose steadily, with a preponderance of ‘Misses’ borrowing throughout most of this period, but an increase in married women borrowers in the years leading up to the cessation of legal deposit music accessions. Some of the later married women might have been the earlier ‘Misses’, but such genealogical research would be a time-consuming exercise!  (We should be mindful of the fact that not every ‘Miss’ needs have been young.)

There’s ample evidence – in the novels of Jane Austen, for example, or in William Makepeace Thackeray’s Vanity Fair – that proficiency in music signified a cultured and educated upbringing, adding to a young woman’s marriageability. An ability to play the piano was also a social asset, as we see in Janet (Jess) Playfair’s diaries, when she records having played reels for dances when a country house guest. Her father, Principal James Playfair, was a copious borrower of music from St Andrews’ collection from the start; so too were his sons. How much was for their own, and how much for family use?  Janet herself appears not to have borrowed music, unless possibly once under her widowed surname of Macdonald. (Her husband Revd. James Macdonald died tragically young in 1810.)

In my researches into this music collection, prior to and during my AHRC-funded Claimed From Stationers’ Hall network project, two women’s names stood out. Miss Lambert – the cataloguer – was the Yorkshire-born niece of Professor John Rotherham. Her widowed mother moved her young family to St Andrews to stay with her brother, after the death of her clergyman husband. Professor Rotherham himself had supervised the compilation of a library catalogue, and it would appear that Elizabeth Lambert (1789-1875) had inherited a natural proclivity for codifying and cataloguing data, for she not only produced the first volume of the two-volume handwritten music catalogue in 1826, but her other reading interests (amply documented in the borrowing records) also included botany, horticulture and conchology. Indeed, she is on published record as having identified a particular shell for Professor John Fleming; she gave her own shell collection to the Natural History Society of Northumbria not long before she died.

The borrowing records show that Miss Lambert borrowed books from the age of about fifteen, and music from about the age of 27, although her brothers had been students at the university and might have borrowed further items on her behalf. Her reading matter also included novels and other books by women authors, along with books about divinity, travel, music composers, and a short-lived music journal called the Harmonicon. She married George Williams in 1832 and moved to London; someone else presumably completed the last entries in her second catalogue volume.

There are a couple of references to her taking music not in numbered volumes – such as ‘7 pieces of music to be arranged’ – suggesting that she may have been involved in compiling music for bound volumes before she started borrowing those volumes. Significantly, there are several volumes where music by women composers appears deliberately to have been gathered together. The earliest and best example is volume 40, although it’s hard to ascribe responsibility for this one to Elizabeth, since it would have been bound when she was only twelve.

The other interesting name is that of the Bertram ladies. Mrs Jane Bertram owned a girl’s school at St Leonards, years before the present St Leonards was established. Her daughters helped her, even travelling to France to further their own education to this end. Since the Bertrams are on record as having borrowed music from St Andrews’ University Library, it is interesting to speculate whether the music was used educationally. The bound composite volumes 9 and 14 certainly suggest that they were:-

One also wonders whether any of the pupils might have been amongst the ‘Misses’ who persuaded professors to borrow music on their behalf.

Mrs Bertram and her daughters subsequently relocated to open a school in Edinburgh. One would like to imagine that without proximity to St Andrews’ collection, they must have been very thankful for the abundance of music commercially available there. On a more serious note, however, the borrowing records at St Andrews provide a fascinating and unique glimpse into music-making in a comparatively remote university town, and many insights into the music most popular amongst borrowers in the early nineteenth century.

NOTE: St Andrews’ music lending was atypical. By comparison, other copyright libraries either kept legal deposit music for reference use only, rejected legal deposit sheet music entirely (e.g. Trinity College Dublin), sold what they didn’t need (as in Aberdeen), or exerted only minimal control over its use (as with the Advocates Library in Edinburgh).