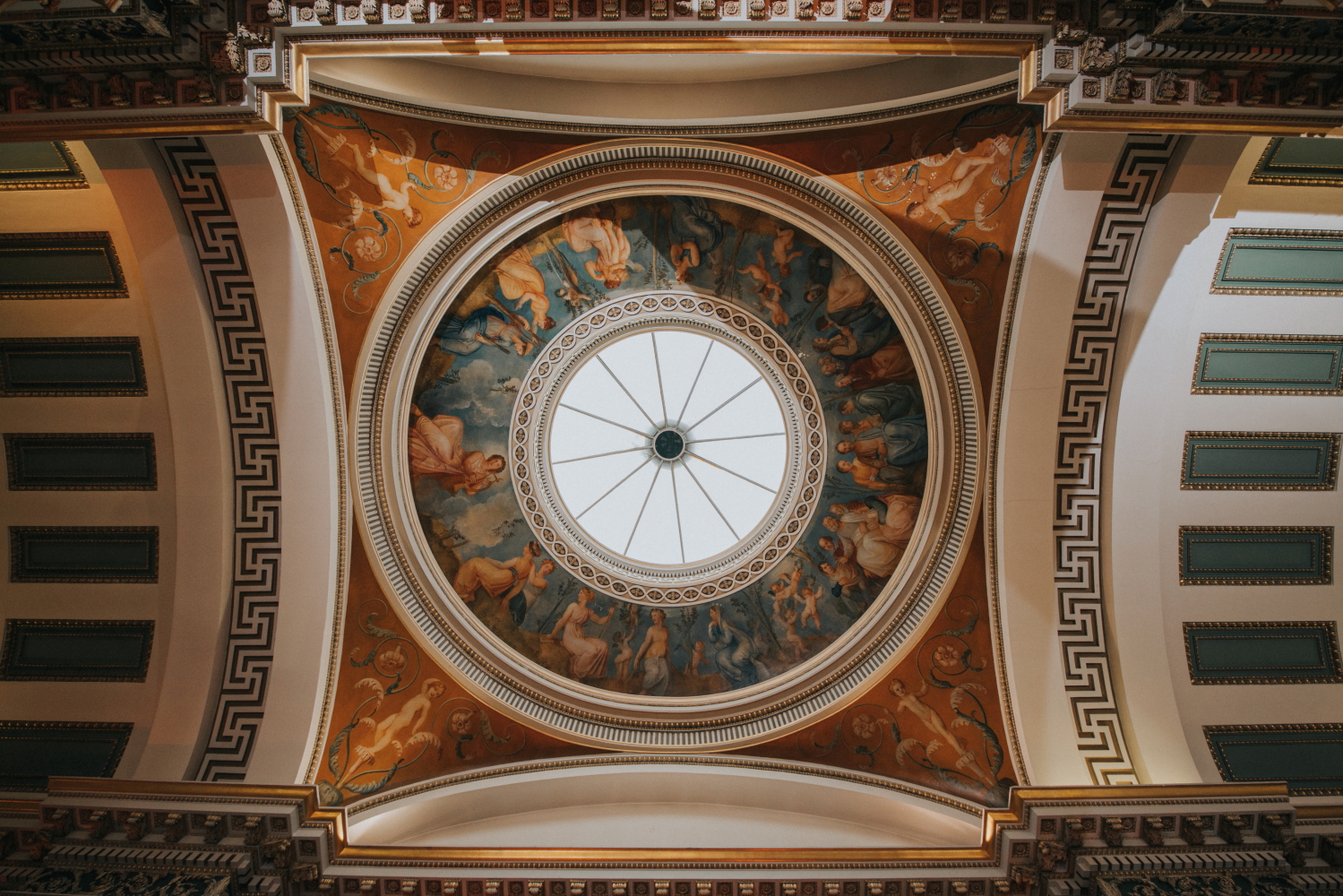 Any keeper of books will know that space is always at a premium and by the late 1790s, two Edinburgh institutional libraries found that they needed more shelves to house their collections. The Faculty of Advocates and the Writers to the Signet came together to create a library complex next to Parliament House. The Signet Library on the lower level was completed first and work on the new Advocates Library was nearly complete by 1821. After a decade of building work, the Faculty of Advocates was nearly ready to move into its new accommodation in Parliament Square.

At its foundation in the 1680s, Sir George Mackenzie of Rosehaugh had described the Advocates Library’s purpose as not just a legal library but also a repository for books that served the law, particularly those on history, rhetoric, and criticism. The library had expanded from then to encompass all types of learned books. It had also benefited since 1710 from  the Copyright privilege – the right to receive copies of all books registered at Stationers’ Hall.

A prominent feature of the new Advocates Library was a cupola designed by the architect William Stark. It was decided to decorate this with a frieze that would celebrate the Advocates Library’s status as the de facto national library for Scotland. This painting was to show the most esteemed authors of the past whose works could be read in the library.

Thomas Stothard, RA  (1755-1834) was an ideal artist for the commission. He was famous for literary group portraits of Chaucer’s pilgrims and Shakespeare’s characters. He was well-known as a book illustrator who had undertaken several commissions in Scotland, including illustrating the works of Burns and Scott’s Rokeby as well as collections of Scottish songs published by George Thomson with whom he worked on a variety of projects. Stothard was prolific and our Books and Borrowers readers would have been familiar with his illustrations from novels, collections of poetry, and non-fiction work.[2]

He was also librarian at the Royal Academy of Art from 1812. He used his artistic skills to illustrate the library’s catalogue:

Stothard prepared his sketches in 1821-1822 and arrived in Edinburgh in June 1822 to complete the work.

The dominant figure of the frieze is Apollo who is surrounded by the nine Muses of the arts. The god and goddesses appear on the west side of the cupola and are therefore the first part of the picture seen by most visitors to the Upper Library. Apollo, a god of many things, but here representing the arts and knowledge, is playing his lyre to the Muses. The figures are elegant and neoclassical.

It is only by walking across the grand room and turning back to the entrance that we see the figures selected by Stothard and his patrons as appropriate companions for the deities. The are divided into three groups: orators, historians and philosophers, and poets.

The theme for the cupola was decided as ‘the Muses’ who would be depicted alongside Scottish poets. The original plan was to depict only Scottish poets, but Stothard found that there were too few for his plan. George Thomson, the collector of Scottish songs, provided an extensive list of Scottish poets, including the only woman suggested for the scheme (Joanna Baillie), but his suggestions were largely ignored. Thomson also championed depicting living poets, such as Walter Scott and William Tennant, but the frieze remained the preserve of the mythological and the dead. Stothard instead suggested including ‘historians and philosophers which Scotland can so amply furnish’.[3] The suggestion was taken up and the collection of worthies therefore had a more international scope than originally planned.

The sixteen chosen worthies were:

Only Cicero can be said to have any connection with law and here he clearly represents oratory and rhetoric. And only five are Scots.

The Stothard’s cupola painting was the finishing touch for the advocates’ new library. It played a part in George IV’s visit to Scotland in 1822. Thomson wrote to Stothard to report that the king was said to have declared that the library was ‘The most beautiful Room I have ever seen’.[4]

The room was – and is – beautiful, but within a few years the advocates found that it was not fit for purpose and embarked on a plan for another new library. The Faculty sold the upper library to its neighbours the Writers and moved into its current location just to the south.

Our project will determine how accurate the choice of worthy figures selected at the end of our date range was. Were these really the most widely read, admired, and important authors in the Advocates Library and the other libraries in our study in the early nineteenth?

The Glasgow Borrowers’ Registers; ‘Top 50’ authors borrowed by students from 1757 to 1771 – the start of our study – shows some continuity. Half of the figures depicted in the cupola feature there. Cicero, Livy, Herodotus, Hume, Robertson, Newton, Homer, and Virgil all appear in both places. Our Glasgow data is too early to see the impact of Burns or Smith. Glasgow students were more likely to borrow Fielding or Pope, neither of whom made the cut. But time will tell and as we transcribe and analysis the evidence from our borrowing registers, we will have a better understanding of what authors Scottish readers favoured from 1750 to 1820.

[1] Both floors are now parts of the WS Society’s Signet Library.

[2] For Stothard, including a checklist of his book illustrations see, Shelley M. Bennett, Thomas Stothard: The Mechanisms of Art Patronage in England circa 1800 (Columbia: University of Missouri Press, 1988).

[3] Quoted in Iain Gordon Brown, Building for Books: The Architectural Evolution of the Advocates’ Library, 1689-1925 (Aberdeen: Aberdeen University Press in Association with the National Library of Scotland, 1989), 105.