Having now officially come on board with ‘Books and Borrowing’ (hooray!) and by way of introduction, I’d like to use this first blog post to say a few words about my recently published monograph and how it relates to the project research. While our team collectively works to gather, process and analyse historic borrowing data from thirteen Scottish libraries, each of us brings a distinctive set of research interests to the table. Some of my own are reflected in this book.

Dialectics of Improvement: Scottish Romanticism, 1786-1831 (Edinburgh University Press, 2020) contributes to the range of new scholarship on Scottish literary cultures of the late eighteenth and early nineteenth century. The book concentrates in particular on the idea of ‘improvement’ as it existed in these years, having evolved across the seventeenth and eighteenth centuries. It finds ample grounds for a view of the turn of the nineteenth century as an ‘Age of Improvement’. And yet, if that label might imply a monolithic phenomenon, the book instead foregrounds the contested and contradictory qualities of what was in reality a very messy set of beliefs and practices applied to a bewildering range of subjects, from poetic form to the macrohistory of human civilisation; or, as James Hogg put it, ‘religion, law, politics, agriculture, and sheep farming’. 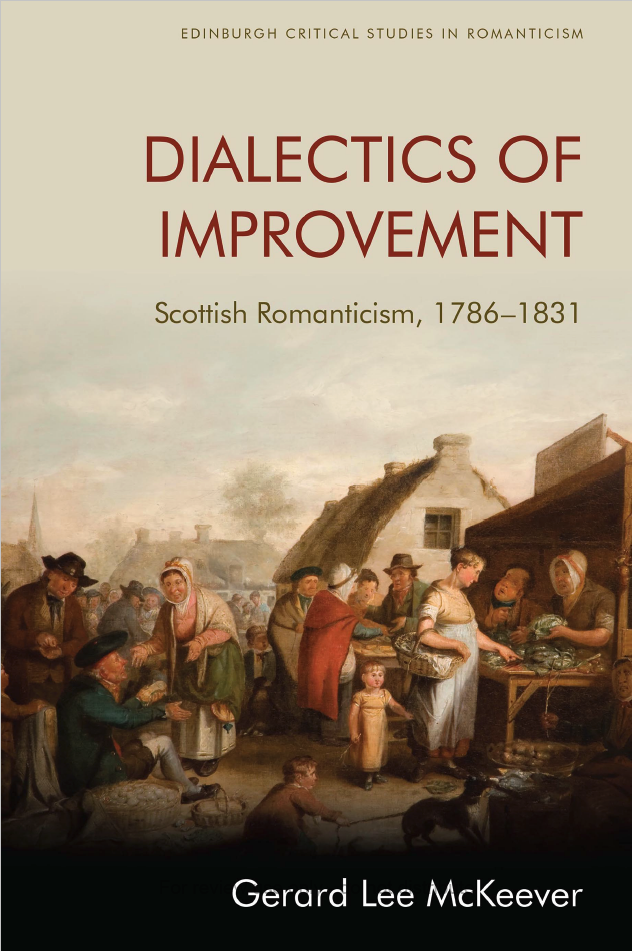 This emphasis on improvement becomes a way of thinking through what we mean when we talk about both Enlightenment and Romanticism in the Scottish context. Improvement was a driving force of Enlightenment culture in Scotland and further afield, but it was also critical to the aesthetic innovations taking place in what we have come to think of as imaginative literature. ‘Books and Borrowing’, too, is interested in revisiting and troubling the categories of Enlightenment and Romanticism as they pertain to Scotland (if at all), not simply via renewed attention to their theoretical makeup, but by assessing the historical record to establish what, in fact, was being borrowed and thus (potentially) read by contemporaries, and how that challenges our received critical narratives.

In a similar spirit, my book also contributes to an ongoing attempt to restore sufficient attention to the religious aspect of Scottish literary culture in this period, which has often been overlooked or downplayed. It is simply anachronistic to apply a fully secular perspective. In my work on Robert Burns, for example, I build on recent research to emphasise how significantly the experience of a regional Enlightenment in Ayrshire, as represented in libraries and other associational institutions, was Presbyterian in its focus. On ‘Books and Borrowing’, we already know about a preponderance of spiritual texts in some of our target borrowing registers, for example that of the Dumfries Presbytery Library. That said, ground-breaking work by Mark Towsey on the Wigtown Subscription Library in what was once a heartland of the Covenanters in southwest Scotland remarkably finds zero religious or devotional texts being lent, suggesting that such works were being accessed by other means.

Finally, as much as it is a book about improvement, Dialectics of Improvement is also centrally concerned with the evolution of the category of literature. Moving principally across poetry, short fiction, drama and the novel, the book tracks the way that approaches to improvement by Scottish writers helped to stimulate the question of literature’s form and function. Certainly the disciplinary evolutions and recalibrations taking place during our period are of paramount interest to ‘Books and Borrowing’. This also raises an interesting methodological conundrum for our database, which needs to manage genre categories – from divinity to rhetoric to natural history – in a way that will be legible to modern users but also respectful of a period in which such categories, not to mention overarching terms such as ‘letters’ and ‘literature’, were in flux.