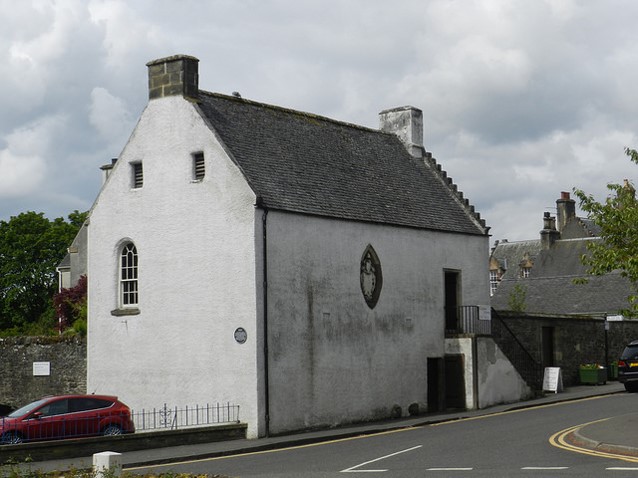 Returning to the archives felt like a very exciting moment! I spent two days photographing the manuscript registers of the Leighton Library, now held at the University of Stirling Archives. Details of the Leighton Collection, including transcriptions of three MS catalogues, are available online. The Leighton Library (or Biblioteca Leightoniana) was founded on the collection of Robert Leighton, Bishop of Dunblane, 1661-1670, later Archbishop of Glasgow, 1670-1674. In his will, Leighton left a sum of money for the building of the library for use by the clergy of Dunblane diocese, along with his personal collection of some 1400 books and pamphlets. A library building was built between 1684 and 1688 in order to house these books. From 1734 the library became one of the first subscription libraries in Scotland, when the Trustees agreed that ‘civis’ (i.e. lay or non-clergy readers) might pay a fee to use the library, and thrived until around 1870. Leighton’s collection of books was supplemented by 18th and 19th century additions, and the collection now comprises around 4,500 books in 85 languages.

The Leighton Library is one of our project partners, and we are very grateful to the Trustees for their permission to include their borrowers’ registers in our project. As is characteristic of borrowing records of our period, the borrowers’ registers from the Leighton Library exist in a number of formats. The two main ledgers on which our project will focus are Leighton MS 27 and Leighton MS 30. MS 27 is a large ledger containing records of borrowings 1780-1840. Leighton MS 30, known, rather delightfully, as the ‘Water Drinkers’ Register’ is a small, soft-bound volume, containing the borrowings of visitors to the spa town from 1814 to 1828. 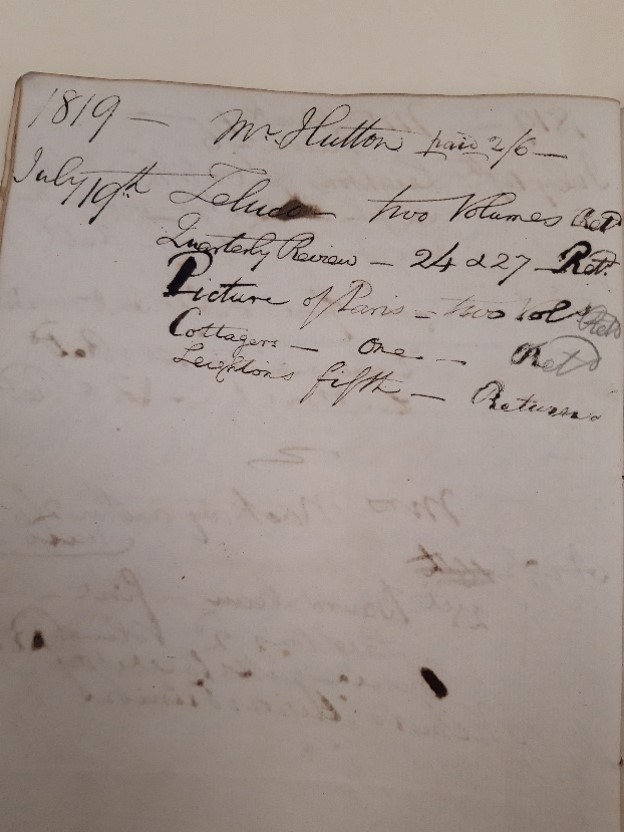 Leighton MS 26 is the earliest record of borrowing, and comprises only one page, covering borrowings from a variety of different periods.

Leighton MS 28, tragically, contains only fragments of borrowing records from 1812-1828.

Leighton MS 25 begins as the Library’s Matriculation book, and contains the library rules, but if one reverses the book and begins at the other end, there are a series of borrowing records (which are continuations of MSS 27 and 30).

Some time between 1813 and 1815, the Trustees of the library agreed to open up its collection by introducing a new short-term borrowing fee of 2/6 per fortnight to capitalise on rising tourist numbers following the discovery of mineral springs at the Cromlix estate, 3 miles North of the town, in 1813. The first entry in the register is Mrs Dalzell, in 1814. Recorded in the Trustees’ Accounts as ‘Company at the Wells’, the Water Drinkers played an important part in propping up the Leighton’s finances in the early nineteenth century.

Although the registers do not always assign either an occupation or an address, it is clear that they came from a variety of different places within the British Isles, including London, Belfast, Glasgow, Dumbarton, Cleveland in Yorkshire, Dunbar in East Lothian, Cardross in Argyll, Keith in Morayshire, and Eldersley in Renfrewshire. They included merchants, army personnel, doctors (both medical and philosophical), clergymen and their wives, a provost, and a professor. Both men and women were admitted, and marital status seems to have been unimportant – both married and unmarried women feature in the register. Occasionally the place of residence while at Dunblane is noted (Miss Robertson ‘at Miss Robbs’, or Mr David Aikman ‘at Mrs Moirs’).

Sometimes they returned for a couple of years, as Professor Cairns did, visiting from Belfast in both 1819 and 1820. They almost all seem to borrow John Moore’s novel Zeluco (1789), Francis Moore’s Travels into the Interior Parts of Africa (1738), Joseph Barretti’s Travels, Elizabeth Hamilton’s The Cottagers of Glenburnie (1808), the Memoirs of Baron de Tott (1784-5), Boswell’s Life of Johnson (1791), Scott’s Poems, Cooke’s Voyages, Volney’s Egypt, Macartney’s Embassy to China and the Annual Register, Edinburgh Review and Quarterly Review.

We are looking forward to finding out more about the Leighton’s borrowers – Water Drinkers and Regulars – during the course of the ‘Books and Borrowing’ project. In the meantime, those interested will find much fascinating material at Leighton Library Borrowers, a site compiled by project Advisory Board member Jill Dye.