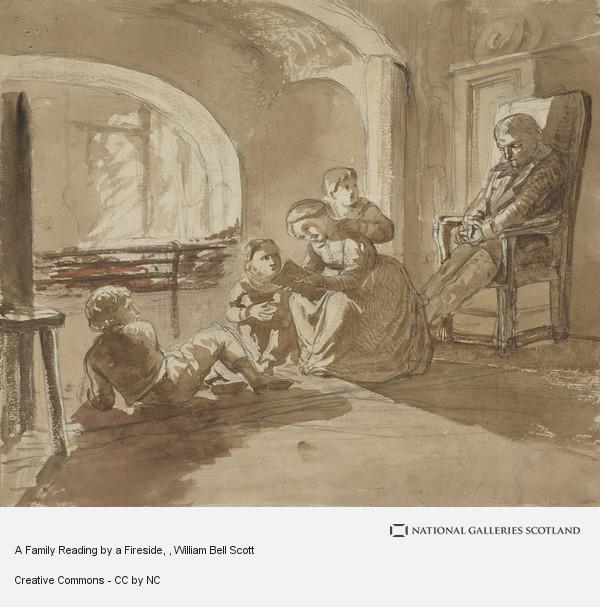 In my last blog post, I discussed the Library of Innerpeffray’s exceptional labouring-class borrowing demographic. Labouring-class people were the driving force for borrowings at Innerpeffray as early as the eighteenth century, contradicting narratives claiming that they only began accessing libraries in the nineteenth century, with access previously exclusive to scholarly, aristocratic, and professional elites. The library was unique as a free lending library, inviting full access to a local population of predominantly farmers, labourers, and weavers. Most comparable libraries, on the other hand, were subscription or circulating libraries, their fees restricting labouring-class workers from borrowing from them. I’ve now analysed nineteenth-century occupational data from the John Gray Library, Haddington, and Selkirk Subscription Library, which illuminate just how exceptional Innerpeffray’s labouring-class demographic is, and this analysis more closely aligns with aforementioned narratives of middling class borrowing trends. For this data, I’m indebted to Vivienne Dunstan, who gifted her transcriptions and biographical research for the John Gray Library and Selkirk Subscription Library to the Books and Borrowing project.

As my last blog post detailed, there were more labouring-class than upper-class borrowers at the Library of Innerpeffray. Data from Haddington gives an indication of how unusual this was; its borrowers are predominantly middling-class artisans and professionals, as Figure 1 demonstrates. 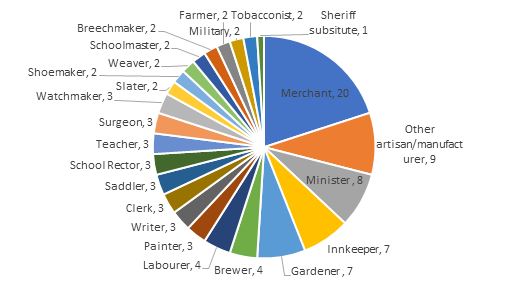 Many ministers and other ‘highly-skilled’ professionals like surgeons and schoolmasters were borrowing from Haddington, as well as a handful of labourers and farmers, revealing that some labouring-class people were able to access the library. Nevertheless, Haddington’s borrowing demographic is undoubtedly the middling class, with artisan occupations such as a merchant, brewer, watchmaker, and saddler represented. Occupations belonging to the ‘other artisan/manufacturer’ category include a cabinetmaker, millwright, tailor, mason, baxter, cutler, tanner, hostler, and butcher. As such, Haddington’s data exemplifies the expansion of middling-class reading which is reputed to have happened in the early 1800s. Further, the presence of ‘unskilled’ workers (albeit a small one) is perhaps an early indication that full access to libraries, which was achieved by 1850,[1] was slowly being realised. Like Innerpeffray, Haddington was a free lending library, openly accessible to all workers.[2] This explains the high middling-class presence at Haddington, which, as evidenced below, differs from the more upper-class borrowing demographic at Selkirk, where fees were required. 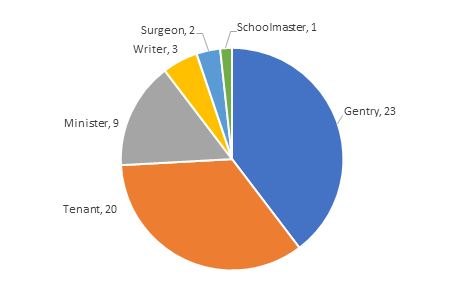 The gentry is the most represented occupation, but there are only three fewer tenant borrowers, indicating a significant labouring-class presence at Selkirk. The remaining borrowers, though, are professional elites, suggesting that, while library exclusivity may have been reduced, its effects were still very much felt in early-nineteenth-century Selkirk.

Comparing these libraries thus reveals that the early-nineteenth century was a transitional period in terms of library access. In each library, the upper class makes up a significant amount of the occupations represented, but, across Scotland, these elite professionals and aristocrats are by no means responsible for the majority of borrowings. Each library has a labouring-class presence, but to a different extent: in Haddington, the middling class were the predominant borrowers, supporting scholarly claims; Innerpeffray’s labouring-class borrowing was more developed than Haddington’s, with ‘unskilled’ farmers and labourers driving borrowing trends; and at Selkirk, labouring-class access was restricted by subscription fees, but they were nonetheless an emerging presence in borrowing records. Changes in borrowing demographics were therefore certainly taking place but at varying paces in each library.

At Innerpeffray, borrowers were interested in a range of books, favouring religious and historical works but also delving into criticism, politics, travel, and fiction. A narrower range of genres is exhibited in the borrowing data from Haddington, with these middling-class workers borrowing histories and biographies the most. Travel books were also relatively popular, and fiction also made an appearance.

At Selkirk, however, I was bewildered (and incredibly excited) to discover that fiction was the favoured genre. Not only this, but novels by women were regularly among the most borrowed books:

The expected histories and travel books do, of course, make an appearance, but there are many more novels by female writers than expected. This contradicts narratives of upper-class ‘hostility to novels’ which ‘reached its peak in the early nineteenth century’.[3] Richard Altick claims that fiction ‘was best adapted to the taste of the reader whose limited education equipped him to relish little else,’[4] perhaps indicating that these books were predominantly loaned to Selkirk’s tenant borrowers, but given the high proportion of upper-class borrowers, this seems unlikely. A study of the gentry vs. tenant borrowing at Selkirk would provide a better understanding of who is driving these trends, but I sadly don’t have the time to explore this during the remainder of my project (although my undergraduate dissertation will study the relative presence of canonical vs. lesser-known female novelists in borrowing records, so perhaps I’ll be able to provide an update within the next year!).

The books which early-nineteenth century readers were borrowing, then, largely align with scholarship on reading trends, which argues for a decline in popularity of religious texts, a significant interest in historical, political, and geographical non-fiction, and a slow rise in the popularity of fiction at around the turn of the century. The interests of labouring-class borrowers at Innerpeffray appear to be consistent with those of the middling class in Haddington, but the desire to borrow novels by female writers at Selkirk is a surprising break from these trends and traditional narratives.

The borrowers and borrowings at John Gray Library in Haddington reflect traditional narratives of early-nineteenth-century reading trends, demonstrating that these narratives do hold some value and can be evidenced by borrowing records. However the predominant labouring-class borrowing demographic at Innerpeffray, as well as the preference of Selkirk’s borrowers for novels by female writers, suggest that there is a more intricate story to tell about nineteenth-century borrowing. The early-nineteenth century is clearly transitional in terms of who can access books and what they are choosing to access, but these changes were taking place at different paces in each library. A replication of my research in other libraries across Scotland would allow for a larger comparative study which would consolidate our understanding of these changes on a more national scale