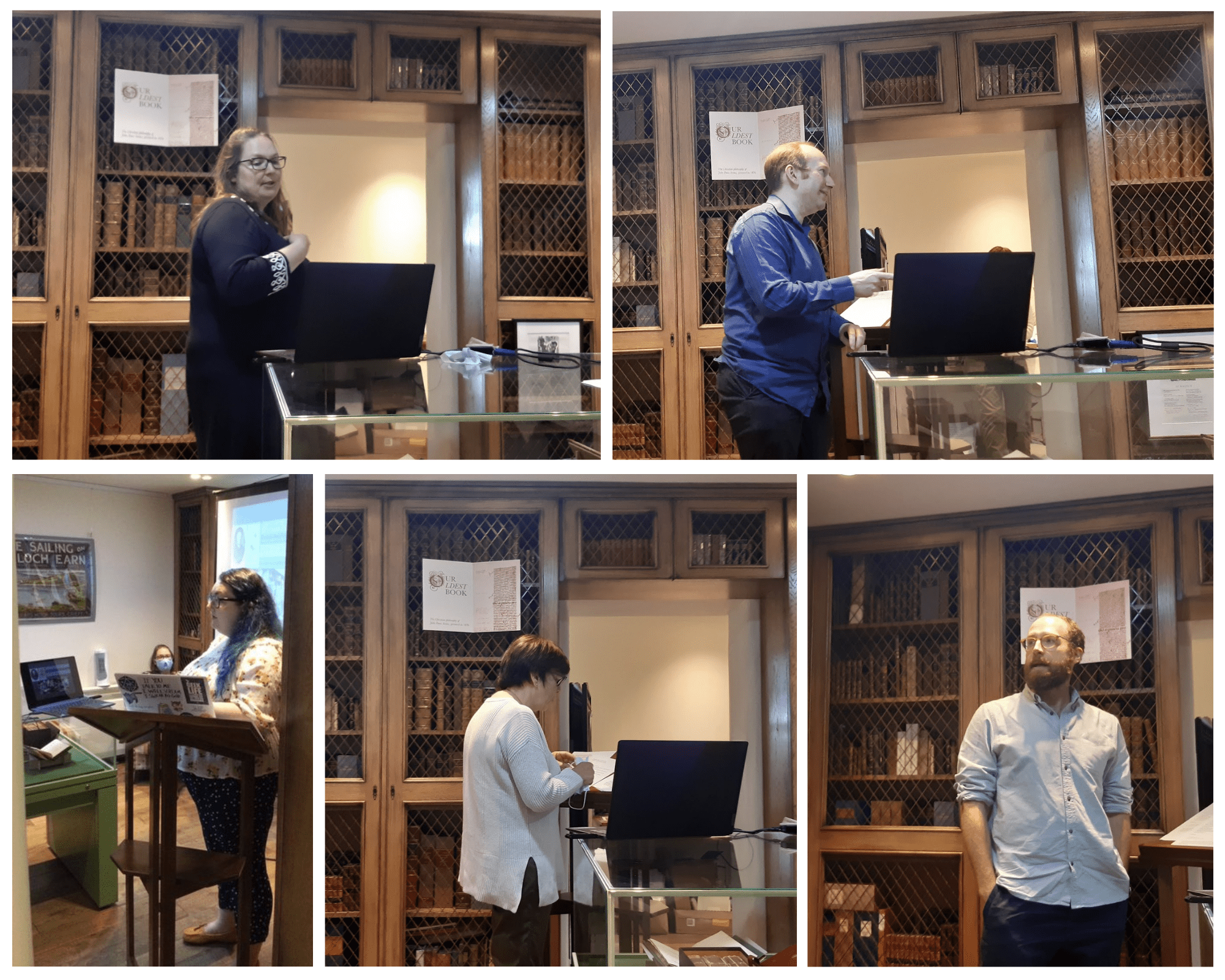 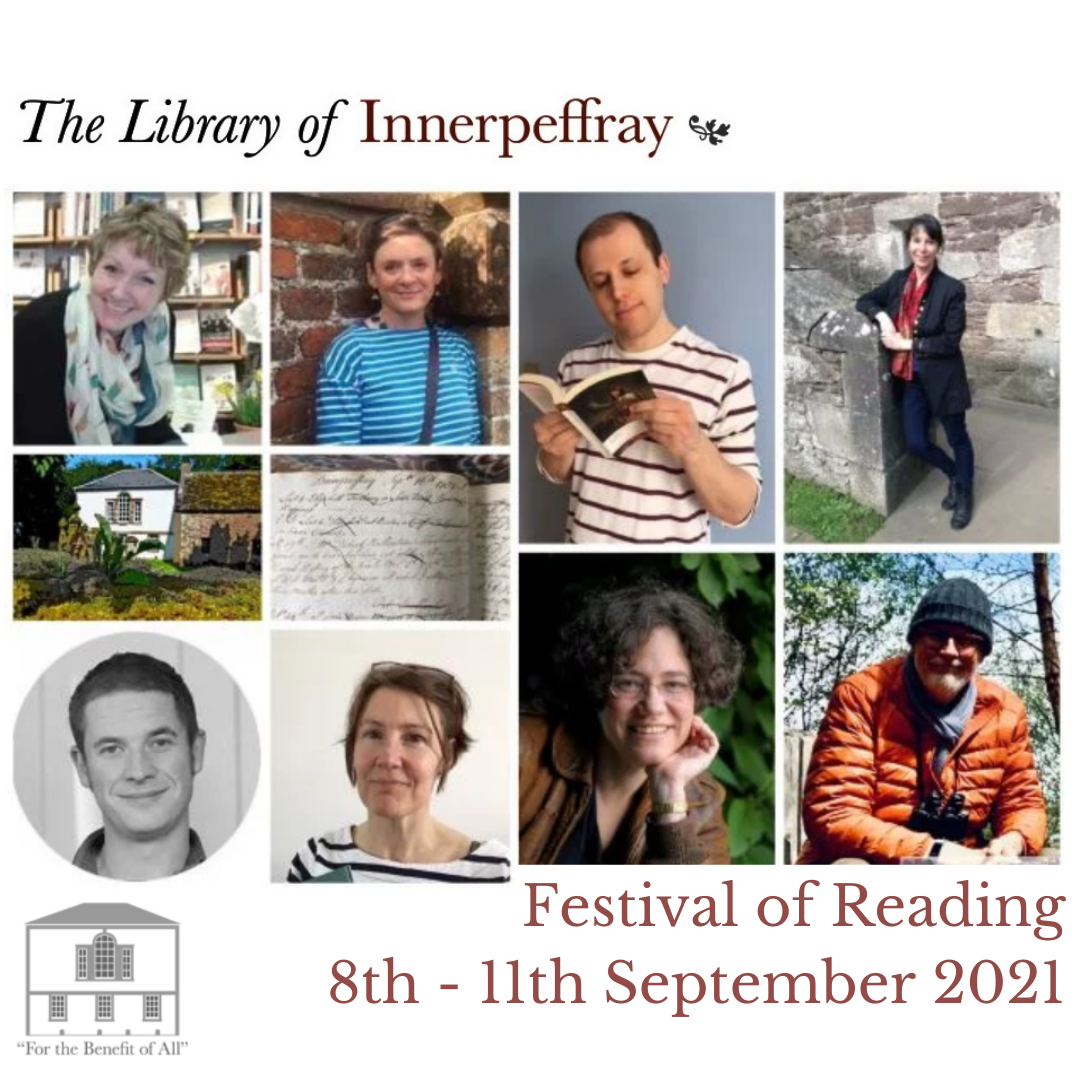 Last week I spent a delightful few days at the Library of Innerpeffray’s inaugural Festival of Reading! From  8 to 11 September 2021, Innerpeffray hosted eight Tayside writers to celebrate the Past on the Page, in celebration of the 250th anniversary of the birth of Sir Walter Scott.

In the run up to the festival, the library started the ‘A Postcard to Reading’ project – a campaign to collect information about reading with participants filling out postcards and sending them in the post from wherever they live. There has been a fantastic uptake and the library has received responses from all over the world – with the furthest so far from Canada and Australia! Some of the first books people remember have been The Wind in the Willows, Little Grey Rabbit, and Winnie the Pooh. The most popular book choices have been The Bible, Pride and Prejudice and The Hobbit or The Lord of the Rings. And miles ahead of any other answer, the most oft-cited response to ‘What does reading mean to you?’ has been escapism and education!

On Wednesday 8 September, the Festival of Reading kicked off with a brilliant conversation with nature writer and wildlife guide Tom Bowser. Organised by the Friends of Innerpeffray Library, in this event Tom discussed the realities of rewilding Scotland through his award-winning Argaty Red Kite project and his 2021 book, A Sky Full of Kites, published by Birlinn. The subject of potentially reintroducing beavers to Scotland certainly divided the audience…

On Thursday 9 September I took part in a creative writing workshop with historian and writer Steph Haxton, writer of the Pendennis trilogy. In addition to writing a series of short pieces inspired by old photographs and objects, we made our own small accordion-fold (or liperello) books and learned about different methods of approaching historical fiction. At the end of the workshop, I even wrote a ghost story about Innerpeffray that might one day see the light of day!

Friday 10 September brought two author events and an evening of music, poetry and song. In the morning, we were delighted to welcome Perthshire author Linda Cracknell for a conversation about writing fiction with an eye on the past and her new book, The Other Side of Stone, which weaves tales of various characters around a woollen mill between 1831 and 2019. The Books and Borrowing team are currently working with Linda on a new event for 2022 – so watch this space!

On Friday afternoon we welcomed New York Times bestselling author Elizabeth Wein to discuss her young adult books including Code Name Verity (2012), The Enigma Game (2020), and The Pearl Thief (2017) – inspired by Innerpeffray Library! It was brilliant to hear Elizabeth’s passion for writing for young people and how her pilot’s license has brought flight into her books.

On Friday evening we gathered in the grounds for drinks and fresh air before moving into the library itself. Brought together by the incomparable Jim Mackintosh, poet and Makar of

the Federation of Writers Scotland, we were treated to an evening of music and words with violinist Karys Watt, guitarist Dave Macfarlane, singer Aileen Ogilvie and fellow poet Julie McNeill. Words cannot describe how magical it was to listen and feel the rhythm through the floorboards – for many, including myself, this was our first live music in eighteen months. Jim and Julie read some of their own poems – inspired by themes of resilience and history – and the band performed songs in both English and Gaelic. Towards the end of the evening we contributed to a unique, crowdsourced poem – five members of the audience read a selection of words that had resonated with them throughout the pandemic, topped and tailed by lines by Jim and Julie. Serendipitous and beautiful – the chosen lines of poetry and prose flowed perfectly, creating a one-off poem just for that audience on that night.

On Saturday morning the library hosted two events – one for families and children and one hosted by our very own Books and Borrowing team! Author and illustrator Natalie Russell took children and their adults on an adventure down the heritage trail to bring their stories to life – I was later told by one participant that he had created a squirrel-beaver cross that loves mangos!

In the main library, Katie, Matt, Isla, Marian, Alex, and Lara presented some findings from their research projects – telling the audience all about the borrowing registers we have been investigating, literacy in Scotland, and Innerpeffray’s visitors’ books. After a quick break we took the audience upstairs and hosted a Q&A, discussing topics such as various occupations found in the borrowing registers (poachers, maids and vagabonds!) and the concept of honesty – the different ways borrowers were trusted to take books home.

On Saturday afternoon we were joined by Gothic writer Helen Grant and historian Steph Haxton who discussed the differences between traditional historical fiction and ghost stories inspired by history. In the course of the panel, we were charmed by stories of spirits taking care of their resting places and scared by tales of ministers hung for crimes they might not have committed!

For the grand finale of the festival, Dr Daniel Cook delighted the audience with renditions and discussions of some of Sir Walter Scott’s supernatural tales, including ‘The Fortunes of Martin Waldeck’, ‘Wandering Willie’s Tale’ and ‘Donnerhugel’s Narrative’. Dan brought home the theme of this first Festival of Reading – inspiring thoughts of the enduring legacy of Scott and the Past on the Page.

Hosting a festival with authors, audience-members, and the possibility of thunderstorms at the end of a pandemic is no small feat but the Library of Innerpeffray prevailed and this inaugural festival was a success! Thank you so much to all the speakers, performers, attendees, organisers, and volunteers for making the week so rewarding. Time to get planning next year’s festival celebrating Scotland’s Year of Stories!