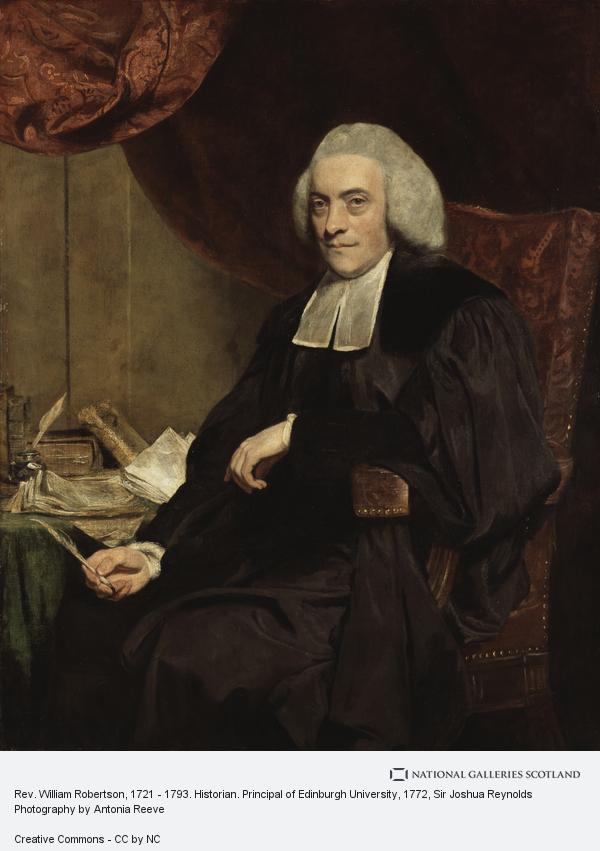 This year marks the tercentenary of the birth of a major figure of the Scottish Enlightenment. William Robertson was a leading moderate minister of the Church of Scotland, Principal of the University of Edinburgh from 1762 until 1793, and a famous author of historical works.

Robertson’s historical works were based on a model of history in which humanity developed in stages. As civilisations advanced they progressed from hunter-gather, to pastoral, to agricultural, and, finally, to commercial societies, they progressed and ‘improved’. For the enlightened historians of the eighteenth century, this meant applying these universal stages across time and place, examining the structure of societies, and quantifying their findings using scientific methods. Robertson used this framework to create a broad view of history which he developed from the local to the global. In doing so, he created an appealing narrative albeit one that is Eurocentric and highly contestable today.

In The History of America, for example, he stated that since ‘…in every part of the earth the progress of man hath been nearly the same…we can trace him in his career from the rude simplicity of savage life, until he attains the industry, the arts, and the elegance of polished society’.[1]

Nevertheless, Robertson was the ‘highest-paid Scottish author of the age’, and was able to sell his copyrights for large sums, the equivalent of nearly £700,000 today.[2] His books were printed in their thousands and, as our borrowing records show, reached a wide audience.

William Robertson was born on 8 September 1721.[3]  His father was then minister of Borthwick, Midlothian. The family moved to Edinburgh in 1733 and the young Robertson matriculated into the University of Edinburgh in 1735. He studied humanity, Greek, logic and rhetoric, and history, adding divinity in the early 1740s when it became clear that he would follow his father into the ministry. On the death of a cousin, the parish of Gladsmuir became vacant: Robertson was licensed to preach in 1742 and ordained in 1744.

The Jacobite uprising of 1745 caused disruption for the country and for Robertson personally. He left his parish to rush to the defence of Edinburgh from the incursion of Bonnie Prince Charlie’s Jacobite army, joining the College Company. He and fellow academics Alexander Carlyle, John Home, and William Cleghorn did not see battle, working as intelligence gatherers instead. Robertson returned to Gladmuir when Edinburgh was occupied by the Jacobites.  Robertson’s pro-Hanoverian views shaped the historical works he would later write.

Robertson became active in the General Assembly of the Church of Scotland, soon taking a leading role among its ‘moderate’ members and promoting and appointment of ministers who demonstrated polite learning and cultural awareness.[4] He married Mary Nisbet (1723-1802) in 1751: they had six children. Robertson became minister of Lady Yester’s Chapel in Edinburgh in 1758.

By then, Robertson was firmly entrenched in Edinburgh’s thriving intellectual society. He was among the first members of the Select Society, a debating society founded in 1754 by Allan Ramsay. Its membership included David Hume, Adam Smith, Lord Kames, John Home, Hugh Blair, and Alexander Carlyle. He contributed to the Edinburgh Review and the Critical Review and provided a preface for his cousin Robert Adam’s Ruins of the Palace of the Emperor Diocletian at Sapalatro (1764). He became Moderator of the General Assembly in 1763.

As early as 1753, Robertson began work on the publication that would make his name as a historian. The history of Scotland during the reigns of Queen Mary and James VI appeared in two volumes in February 1759. It was instantly and enduringly popular.[5]

Principal of the University of Edinburgh

Robertson became Principal of the University of Edinburgh in 1762. His impact was immediate as he ambitiously embarked on an extensive modernisation programme for the curriculum, reputation, and the fabric of the university.[6] As part of his reform programme, Robertson was keen to develop the medical faculty. In 1763, it was agreed that members of the Royal College of Surgeons would have the privilege of using the University Library. Part of the arrangement was that the surgeons gave their collection of 560 medical volumes to the university in return for an access fee of £5 per year.[7] The university established new professorships in pharmacology (1768), surgery (1777), natural history (1790), astronomy (1790), and agriculture (1790).[8] All of the university’s traditional chairs became vacant during Roberton’s administration and he was able to nominate his moderate literati friends to fill them. These friends included internationally recognised intellectual stars such as Adam Ferguson, Dugald Stewart, Hugh Blair, William Cullen, Joseph Black, Alexander Monro II, John Hope, and John Gregory. These appointments, and the quality of teaching that resulted, gave the university an ‘enlightened’ reputation.[9]

One of Robertson’s priorities as principal was updating the university library. The esteem in which he was held meant that he was able to unlock the finances needed to develop the collection via Town Council funding. He commanded his professors to collect the matriculation fees due from students since this important source of income had fallen into abeyance. Active librarians catalogued the collection and presentations of books from professors and authors rolled in. Some of these, such as Professor Robert Whytt’s Observations on the nature of… nervous disorders (1765); James Lind’s Essay on diseases incidental to Europeans in hot climates (1768); and Adam Ferguson’s Essay on the history of civil society (1767) were heavily borrowed by Edinburgh’s growing number of students, as our database shows.[10]

By 1768, the success of Robertson’s reforms meant that he was ready to lobby for a much-needed new building. His scheme was ambitious and expensive. It also required the cooperation of the Town Council and a grand plan from Robert Adam. After more than twenty years of planning, the foundation stone was ceremonially laid on 16 November 1789. Neither Robertson nor Adam lived to see the completion of their grand project, today known as Old College.

Robertson was one of the most prolific users of the Edinburgh University Library. Between 1763 and his death, he borrowed more than 3500 volumes.[11] The limit on borrowing was officially twenty-five volumes for professors, but their borrowing registers show that not only was this not enforced, Edinburgh’s professors, including Robertson, kept books out on loan for years at a time.

Robertson died on 11 June 1793 at his Edinburgh home and was buried in the Robertson family plot in Old Greyfriars kirkyard. He left his books, along with treasured items to his family including, ‘…my gold snuff box set with diamonds a present form the Empress of Russia which I wish the person who shall succeed to me by virtue of this Disposition to preserve in his or her family as a memorial of me, and to transmit it to his or her heirs with the same Injunction Item my picture printed by Sir Joshua Reynolds. Item my gold Watch and seals and all my books papers and manuscripts Item my silver bread basket and writing stand’.[12]

[2] Richard B. Sher, The Enlightenment and the Book: Scottish authors & their publishers in eighteenth-century Britian, Ireland, and America (Chicago: Chicago UP, 2007), p. 214.

[5] In 1773, Dr Johnson’s tour of Scotland included a visit to Holyrood Palace. James Boswell ‘…was much entertained while Principal Robertson fluently harangued to Dr Johnson upon the spot concerning scenes of his celebrated History of Scotland’. The day also included visits to the Advocates Library and the University of Edinburgh library in Robertson’s company. Boswell’s Edinburgh Journals, 1767-1786, ed. Hugh M. Milne (Edinburgh: John Donald, 2013), p. 105-107. During her visit to Scotland in 1766, Elizabeth Montagu’s impressions of the sights of Edinburgh were enhanced by her reading of History of Scotland. She also met Robertson and heard him preach. See ‘Seeking the Sublime: Elizabeth Montagu in Scotland’.

[10] Finlayson and Simpson, ‘History of the library’, p. 58. At time of writing, transcriptions have been completed for Edinburgh’s student receipt books from Jan. 1769 to Jan. 1777.