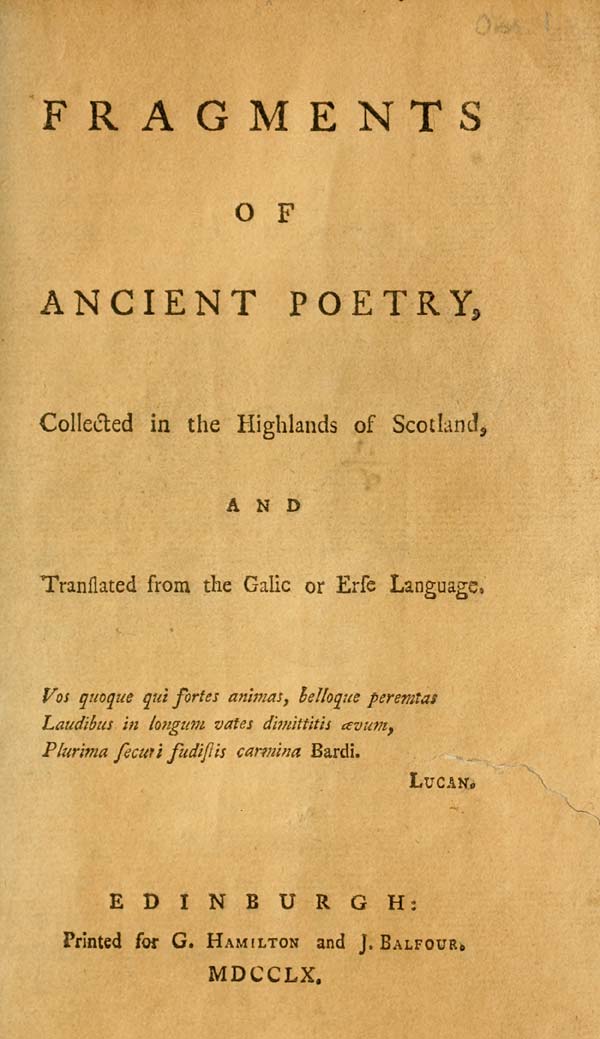 Cuchullin sat by Tura’s wall; by the tree of the rustling leaf.—His spear leaned against the mossy rock. His shield lay by him on the grass. As he thought of mighty Carbar a hero whom he slew in war; the scout of the ocean came, Moran the son of Fithil.

Elizabeth Montagu was in need of a holiday after setting up a colliery at Denton Hall, near Newcastle in the summer of 1766. Dr John Gregory, the newly appointed Professor of the Practice of Medicine at the University of Edinburgh, was heading north from London with his family: he offered to serve as Montagu’s tour guide if she wished to visit Scotland.

She did. Mrs Montagu  – the ‘Queen of the Bluestockings’ – was well read in the latest Scottish literature and had all the background needed for a successful literary visit to Scotland.[1] The picturesque awaited over the border and Montagu was keen to find it.

Although she had not yet published the book that would secure her reputation as a learned and scholarly woman, An Essay on the Writings and Genius of Shakepear [sic] (1769), Montagu was well-known as a patron of the arts. She managed her husband’s estates, including coal mines like the one at Denton, with skill. She described herself as ‘a Critick, a Coal Owner, a Land Steward, a sociable creature’.[2] As with other women in the group known as the Bluestockings, Montagu mainly socialised with men.[3] This proved to be the case for her Scottish tour, but she did find at Edinburgh ‘a most agreeable set of men and women’ and reported that the ‘the scotish [sic] women are very sensible & well informed, they do not nickname Gods creatures or make their ignorance their pride like my fair Country women’.[4]

Montagu sought the scenery and experiences that she found in her reading: Burke on the sublime, Hurd on chivalry and romance, and, above all Ossian’s stories of Fingal and Temora.[7] She shared her thoughts with her husband, sister, and other correspondence throughout her travels.

Montagu’s reputation as a patron of the arts and intellectual as well as her friendship with Dr Gregory meant that she met and dined with the leading figures of the Edinburgh literati. She met with Lord Kames (who later guided her visit to Stirling), Dr William Robertson, and Dr Hugh Blair. She heard Robertson and Blair preach during her stay in Edinburgh. The Lord Chief Baron of the Exchequer, Robert Ord, escorted her on a visit to Hopetoun House. Montagu was captived by Edinburgh Castle and Holyrood Palace. Her reading of Robertson’s History of Scotland (1759) informed her opinions about their famous resident, Mary, Queen of Scots.[5]

Blair proved to be a lifelong friend despite his scepticism about the veracity of the poems of Ossian. Montagu was a believer and toured Scotland to see the sublime locations mentioned in the poems. She passed through Glasgow on the way to the Highlands, pausing to take in the cathedral, the university – where Professor of Mathematics Robert Simson desired her to pass his good wishes to her husband – and the Foulis brothers’ printing house and picture gallery at the university.[6]

Montagu carried her Ossian with her throughout her tour so that she could read the poems in the glorious settings where Ossianic events were said to have taken place.

I travell’d by Lough Loman to Inverary. I was much pleased with the Lake, but transported with the Mountains. … I … wanted nothing to compleat my happiness but that Ossian’s Ghost would have sung in my ear the tales of other times, but memory did this for me.[8]

Montagu was not alone in her admiration of Ossian’s works. Both Fingal (1762) and Temora (1763) were popular with the students of the University of Glasgow who borrowed the poems twenty-eight times between 1767 and 1770.[9] Our growing Books and Borrowing database already records borrowings at Glasgow by the professors there and at Edinburgh, St Andrews, and Wigtown.

Every one of the men mentioned above appears in our growing ‘Books and Borrowing’ database as a borrower – even Baron Ord (Edinburgh University Library) and the Foulis brothers (Glasgow University Library). Time will tell if Elizabeth Montagu was granted the privilege of borrowing books from any of our project’s libraries during this visit or any of her subsequent visits to Scotland. We have already found women borrowers in the universities and we hope to find more.

Montagu’s visit to Scotland proved to be important for her. Her health improved and she enjoyed the polite hospitality of the people she met. Dr Gregory’s daughter Dorothea later became Montagu’s companion. Montagu’s nephew Morris Robinson resided with Hugh Blair while studying at the University of Edinburgh in the mid-1770s: perhaps we will find him as a student borrower in the Edinburgh receipt books. [With thanks to Joanna Barker from EMCO for letting me know that it was Morris and not his brother Matthew who stayed with Blair. Too many ‘M’s!]

[9]Eighteenth-Century Borrowing from the University of Glasgow, https://18c-borrowing.glasgow.ac.uk/results/?type=author&letter=O&aid=604.