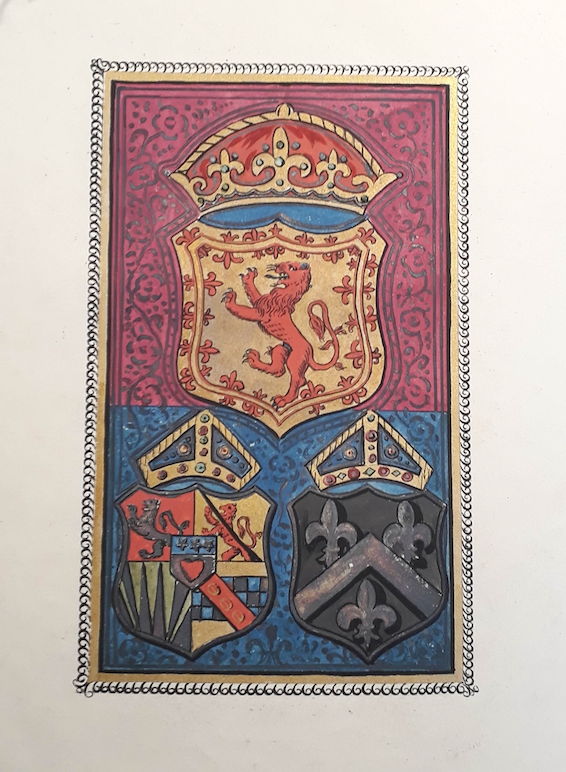 Not many people today would recognise the Bannatyne Club if you mentioned it in casual conversation, but in 1820s Edinburgh it was a name on everyone’s lips.  Branded ‘harder to gain entry to than parliament’, the exclusive society, at first limited to thirty-five members, later to a hundred, had been founded in 1823 by a group of friends including Sir Walter Scott for the purpose of ‘publishing dilettante editions of our National Literary Curiosities’.  These ‘dilettante editions’ took the form of lavish volumes of medieval and early modern Scottish literature and history, printed on paper specially made for the club, illustrated with expensive engravings, and circulated strictly privately amongst club members.  Each member was expected to pay the expenses of producing one of these volumes himself, an expensive undertaking that could easily run into the hundreds of pounds (tens of thousands in today’s money).  Predictably, given such a bar, the ‘Bannatynians’, as they called themselves, were the elite of the elite: leading lawyers, politicians, peers, and industrialists who represented the highest echelon of Scotland’s ruling class.

There were, of course, plenty of clubs and societies for the nineteenth-century elite.  What made the Bannatyne different was its literary output.  Not only were the books they published beautiful, they often represented the best and frequently only editions of key texts from Scotland’s past.  As the club went from strength to strength during the forty-odd years of its existence it published over one hundred volumes of primary sources for the study of Scottish cultural history, as well as providing the model for half a dozen imitative societies which produced at least as many more.  As a result, Bannatyne Club publications remain an essential source for scholars today, even though most who use them are only vaguely aware, if at all, of the club’s original context.

My new book – not yet written and certainly not yet with a set publication date – will be the first study of that context, of the club, and of its immense but largely unrecognised impact on subsequent Scottish scholarship.  As part of that project, I’m eager to see what the Bannatynians borrowed.  Most were Edinburgh-based for at least part of the year and many had close professional or social ties to the Faculty of Advocates and the Advocates’ Library (the forerunner of the National Library of Scotland) so I’m anticipating particularly heavy club use of that institution, but since work has only just begun on the Advocates’ borrowing registers I’m in the somewhat unenviable position of having to make predictions as to what the project will find.  Without further ado, I predict:

Only time – and work on the registers – will tell if these are accurate predictions.  Whether they are or not, I’m excited to see what the project will reveal about the Bannatynians and their books.  In a way, the best-case scenario would be something radically unexpected that would force me to change my ideas entirely . . . .