Walter Scott’s novels typically feature at least one central character who has been conspicuously shaped by their reading and/or by experiences of oral storytelling. These characters present a natural avatar for the reader and also stand in for the author himself. There are versions of this in Scott’s earlier metrical romances, but the prototypical example is Edward Waverley from Waverley (1814), whose ‘romantic’ adolescence is explained in large part via his love of works by the likes of Edmund Spenser and Jean Froissart.

Scott derived this aspect of his work from sources including Cervantes’s Don Quixote (1605-15), which remained hugely popular in Britain in the second half of the eighteenth century in Charles Jarvis’s much reprinted translation of 1742. For that reason, it always contains a satirical view of readerly excess, of what happens when one lives too much in stories and in books, from Waverley’s ‘splendid yet useless’ education to the bottomless textuality that turns existence into metafiction in The Antiquary (1818).[1] 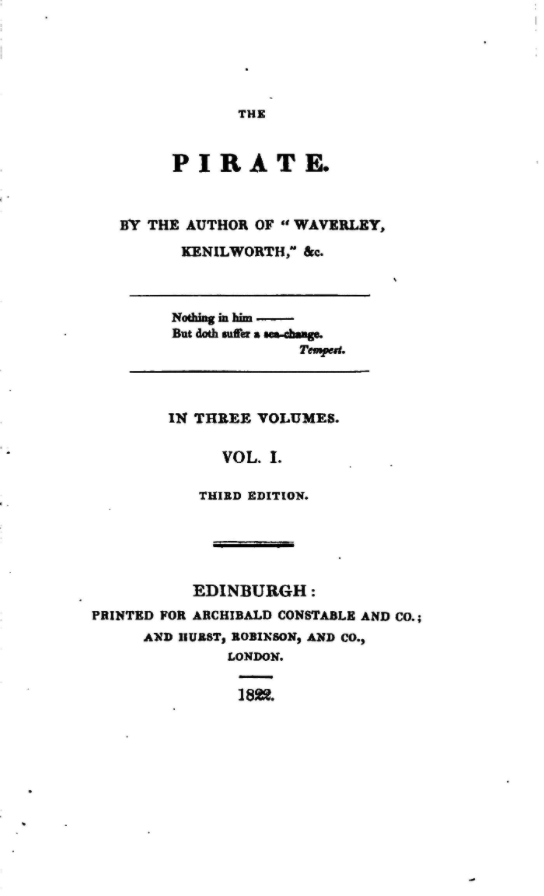 For all such dangers, however, Scott also presents this version of Bildung as essential to the formation of sensibility as well as attachments to place. In The Pirate (1822), for example, Scott’s novel of the Shetland and Orkney archipelagos, the teenage years of the protagonist Mordaunt Mertoun are filled with ‘the classical tales of antiquity’ as well as, even more significantly, ‘the strange legends of Berserkar, of Sea-kings, of dwarfs, giants, and sorcerers, which he heard from the native Zetlanders’.[2] This material is a bridge that roots Mertoun in his adopted home and it grants him the moral authority to headline the novel.

Scott’s works thus participate in (or rather, dominate) a much wider conversation taking place in and beyond the fiction of the early nineteenth century about the effects of reading, which scholars such as Paul Keen have associated with a rapid expansion of the reading public and an ensuing panic about the consequences of newly-enfranchised demographics (notably women and lower-income groups) entering the ‘republic of letters’.[3]

Walter Scott, the most famous poet of his era (alongside Byron) until in 1814 he also became its most successful novelist, necessarily looms large in any discussion of the cultural politics of the early nineteenth century. William St Clair observes that Scott’s poetry would remain ‘amongst the favourite reading of the whole nation throughout the nineteenth century’, and makes the rather bolder claim that, ‘During the romantic period, the “Author of Waverley” sold more novels than all the other novelists of the time put together’.[4] However Scott’s influence is quantified, it is telling that it does not seem altogether absurd when St Clair attempts to apportion him significant blame for both the American Civil War (1861-1865) and the First World War (1914-1918), on the basis of his role in shaping the (to use St Clair’s phrase) ‘mentalities’ of the nineteenth century![5]

Scholars of library history specifically have long recognised the importance of Scott’s rise to hegemonic status.[6] By virtue of both their desirability and respectability, Scott’s works were instrumental in breaking down cultural barriers that had excluded perceived trivial or (especially in the case of novels) immoral genres from institutions with polite and ‘improving’ aims. In some cases, this ban on novels (and to a lesser extent poetry) had been absolute, in others exceptions had been made for approved canonical works such as Alain-René Lesage’s Gil Blas (1715-1735) and the picaresque novels of Tobias Smollett.

In the wake of Scott’s success, this suspicion became increasingly unsustainable, such was the transformative effect his works had on the cultural capital of ‘romance’ as a historical and sociological hermeneutics. This took place coincident with the emergence of ‘literature’ in its modern form as a legitimate field of scholarly inquiry; it also benefited from and helped to stimulate new cultures of affordable print that consolidated reading for entertainment as a primary leisure activity of all the but the most deprived sections of society in Britain and elsewhere.

Turning to the ‘Books and Borrowing’ dataset briefly, ongoing work on previously unstudied borrowing records from the Wigtown Subscription Library across 1828-1836 is abundantly bearing out this seismic moment in British culture and in the anglophone globe more generally. (In fact, a deluge of translations and adaptations took Scott’s influence much further than that: see, for example, Flaubert’s account of Emma Rouault’s trip to see an operatic adaptation of The Bride of Lammermoor (1819) in Rouen, Normandy: ‘She found herself back in the familiar books of her youth, deep in Walter Scott.’)[7]

Unsurprisingly, the full range of Scott’s works remained very popular at Wigtown at the turn of the 1830s: at the time of writing, with roughly three-quarters of this new dataset incorporated into our system and added to existing data for the first five years of the library (1795-1799), Scott’s nine-volume Life of Napoleon Buonaparte (1827) is the third most popular work at Wigtown overall, surpassed only by borrowings of periodicals. And, when borrowings of Scott are considered cumulatively, he appears to be comfortably the most popular single author in the borrowing ledgers that have survived from Wigtown.

This is a pattern that we can expect to see replicated in a number of other libraries for which we have records covering the early nineteenth century. Rather than simply bolstering the evidence base for a widely understood phenomenon, however, close analysis of our data should ultimately produce a more nuanced view of Scott’s impact on library use in Scotland. It will allow us to quantify how the varying popularity of his separate works was distributed regionally, in different kinds of institutions and across different types of reader. It will also allow us to couch such findings within more general patterns such as the comparative popularity of different genres of writing, enabling new, empirically grounded conclusions to be drawn about the way that Walter Scott reshaped the literary culture of the nineteenth century.

[3] Paul Keen, The Crisis of Literature in the 1790s: Print Culture and the Public Sphere (Cambridge: Cambridge University Press, 1999).