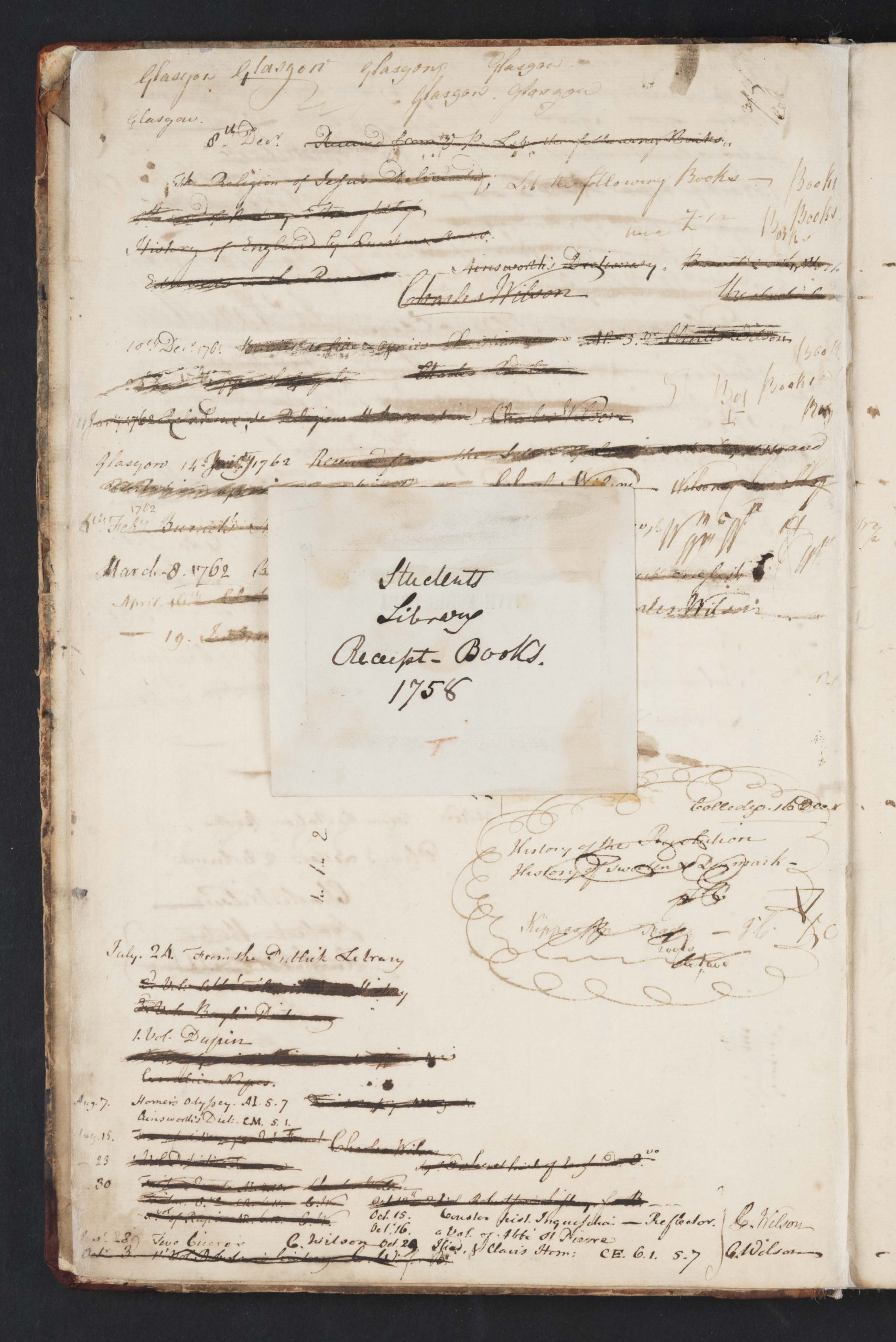 One of the pilot projects for ‘Books and Borrowing’ was ‘Enlightenment Readers in the Scottish Universities’, which was funded by a Research Incentive grant from the Carnegie Trust for the Universities of Scotland and a grant from the University of Glasgow’s Chancellor’s Fund.  This project was conducted by three of the Books and Borrowing team (Matthew Sangster, Karen Baston and Brian Aitken), who sought to digitise, transcribe and make openly available the surviving eighteenth-century borrowing registers from the University of Glasgow Library.

We’re pleased to announce that the main output of this project, Eighteenth-Century Borrowing from the University of Glasgow, is now live.  This constitutes a prototype for the database that the ‘Books and Borrowing’ project will eventually produce, covering just over 8,000 student borrowings dating from between 1757 and 1771.

The new site provides a range of interfaces: you can search the data, controlling a number of parameters; browse the registers page by page; browse normalised book titles, author names and student names; examine the professors on whose authority books were taken out; consider borrowings by the classes in which students were enrolled; browse by lending dates; and glance through the unnormalised line entries as originally recorded in the registers. The most popular books and authors, and the most assiduous borrowers, can be seen using the frequency lists. In all cases, clicking through will take you to pages where you can tab between our transcribed data and high-resolution, zoomable images of the original manuscripts.

To help explain the borrowing records, the site provides contextual information on the University library in the eighteenth century (reproduced below as an introduction to the library), as well as a list of the professors and a transcription of some of the library’s rules.

We’re actively looking for feedback on Eighteenth-Century Borrowing from the University of Glasgow; feedback will inform both improvements to its own functionality and the design of the more complex and comprehensive interface necessary for ‘Books and Borrowing’, which rather than covering a single library over a relatively short period will cover fifteen and range across eighty years.  If you have any comments, please send these to matthew.sangster@glasgow.ac.uk in the first instance – we’d love to hear from you.

Glasgow’s Library in the Eighteenth Century

The University of Glasgow flourished in the eighteenth century, playing a leading role in what was later dubbed the Scottish Enlightenment. The period between March 1757 and January 1771 covered by the surviving student borrowing registers coincides with the tenures of many of the University’s most renowned professors, including the moral philosopher and economic theorist Adam Smith; the legal scholar and sociologist John Millar; the chemist and anatomist Joseph Black; the common-sense philosopher Thomas Reid; and the natural philosopher and technologist John Anderson. The university was educating an increasingly large and diverse student body and riding high as both a centre of intellectual inquiry and a training ground for practical knowledge. In proclaiming its merits, the poet John Mayne was keen to stress both its range and its reputation:

If ye’ve a knacky son or twa,
To Glasgow College send them a’;
Wi’ whilk, for gospel, or for law,
Or classic lair,
Ye’ll find few places here awa,
That can compare! (p. 6)

The University’s substantial library was a crucial support for its missions. While not as large as those of the English universities or some of the aristocratic collections in Scotland, it was nevertheless a major and expanding repository of knowledge. The shelves initially covered in the 1691 manuscript catalogue (MS Gen 1312), which was subsequently added to as the library grew, contained 4,222 volumes, including about forty manuscripts. By the late eighteenth century, the library had more than quadrupled in size. The first printed catalogue, compiled by Archibald Arthur and published in 1791, contained over 20,000 items. This growth was partly attributable to donations, partly to faculty purchases and partly to the copyright privilege granted to the Scottish universities in 1710, which entitled them to claim a copy of each new book registered at Stationers’ Hall. While the Act of Parliament that underpinned this privilege was often circumvented, with publishers declining to register expensive learned works, it did send a great deal of cheaper print to Glasgow, including most of the novels and many of the travel accounts that proved popular among the students. Growth in the collections accelerated later in the eighteenth century, but during the period the student registers cover, the collection was well north of 6,000 works. Of these, just over 1,000 different titles circulated during the window the registers document.

During the 1720s, it had become apparent that the library had outgrown older quarters built in the seventeenth century, and a new building was constructed using designs commissioned from the architect William Adam. This building was completed in 1743 and the books rehoused within it in 1744. The new Library contained two basement teaching rooms; a two-storey library room with a columned gallery; and rooms above the main library that provided space for the Academy of Fine Arts run by the publisher brothers Robert and Andrew Foulis.

As well as serving the town and its environs, the University attracted numerous students from Scotland more broadly, from England and Ireland (particularly the north), and from abroad, including the Americas and Russia (two Russian students, Ivan Andreyevich Tretyakov and Semyon Efimovich Desnitsky, studied at Glasgow under the patronage of Empress Elizabeth II; both went on to become Professors of Law at the University of Moscow).

While some students matriculated to take particular classes without planning to complete a full course of studies, many pursued the degree of Master of Arts. To graduate with an MA usually entailed taking classes in Latin and Greek; Rhetoric (including Logic); Ethics; and Natural Philosophy. More advanced classes, sometimes leading to higher degrees, were offered in Theology and Divinity; Law; and Medicine, Anatomy and Physic.

Matriculated students could borrow up to three books at a time for up to a fortnight if they paid two shillings a year to the library fund. Those with an MA could borrow for four weeks, and ex-students could also make relatively free use of the library (as shown by the significant number of borrowings by those signing themselves as preachers or ministers). As detailed in the library rules included in Register 2, students needed authorisation from a professor to borrow, or from three professors in the case of some fragile, rare or valuable works. Students also agreed to be fined if they returned works late or damaged. While reading in the library was possible, the hours that it was open were quite limited and students were discouraged from loitering, so sustained engagements with works would often mandate borrowing them.

The main university library was not the only one available on campus; a dedicated library for the Humanity class was established in 1725, and others followed for some of the other Arts classes, for Divinity, and for Medicine (Dickson, pp. 26-27). Unlike St Andrews, where there were relatively few recourses apart from the university library, Glasgow had a thriving book culture. While the foundation of William Stirling’s public library did not occur until 1791, access to booksellers (including John Smith, who established his business in 1751 and operated Glasgow’s first circulating library from 1753), publishers, literary clubs and private collections meant that students did not inevitably need to borrow from the university. There is a notable discrepancy between the number of students who matriculated in the period and the number of names that appear in the borrowing registers. However, the library was a key means by which keener students could work with periodicals and larger multivolume works, study more esoteric subjects, access additional copies of popular texts and interact with the new and entertaining volumes the Copyright Act brought in.

The borrowing records do not represent a completely comprehensive view of what students were reading, but they do provide an invaluable qualitative and quantitative grounding for considering what books students interacted with and how they interacted with them. Surveying frequently-borrowed works (shown in the frequency lists) can be used to infer curricula and commonly-available reference points, but more particular interactions and chronologies can also be traced. The first borrowing of a work by David Hume occurred roughly halfway through the span the registers cover, when Mathematics student Archibald Ferguson borrowed his Enquiry Concerning the Principles of Morals on Christmas Eve 1763. However, between February 1765 and December 1770, works by Hume circulated on 132 further occasions, with the vast majority of loans being volumes of his History of England, implying that it was in the later 1760s that his writings began to make a major impact in Glasgow. Detailed engagements with specific volumes can also be traced. The 1765 borrowings of Samuel Richardson’s lengthy novel The History of Sir Charles Grandison appear to show three members of the same Logic class seeking to work their way through it (although only one, Colin Campbell, seems to have persevered through all six volumes). While some students, like James Boswell, made only cursory use of the library, the most prolific borrower, Henry Stevenson, took out 203 books between 1761, when he was a fresh-faced Logic student, and 1770, when he was working as a preacher. Fittingly, in 1772, his devotion to the library resulted in his being appointed briefly as Librarian.

The surviving Glasgow borrowing records occupy an important transitional moment in the history of knowledge, during which modes of authority were being renegotiated and dividing into more specialised forms. This can be seen in the move from more general histories to more specific ones and in the appearances of competing works on particular subjects as the records proceed. However, the range of books that students engaged with indicates that a comprehensive general knowledge remained both socially desirable and potentially graspable. It is also clear from surviving copies that students approached the library with levity and scepticism as well as seriousness and reverence. While the French historian and educationalist Charles Rollin was the author most frequently consulted, the annotations in his works make it clear that not all his claims were subject to silent assent.

Coutts, James, A History of the University of Glasgow (Glasgow: James MacLehose and Sons, 1909).