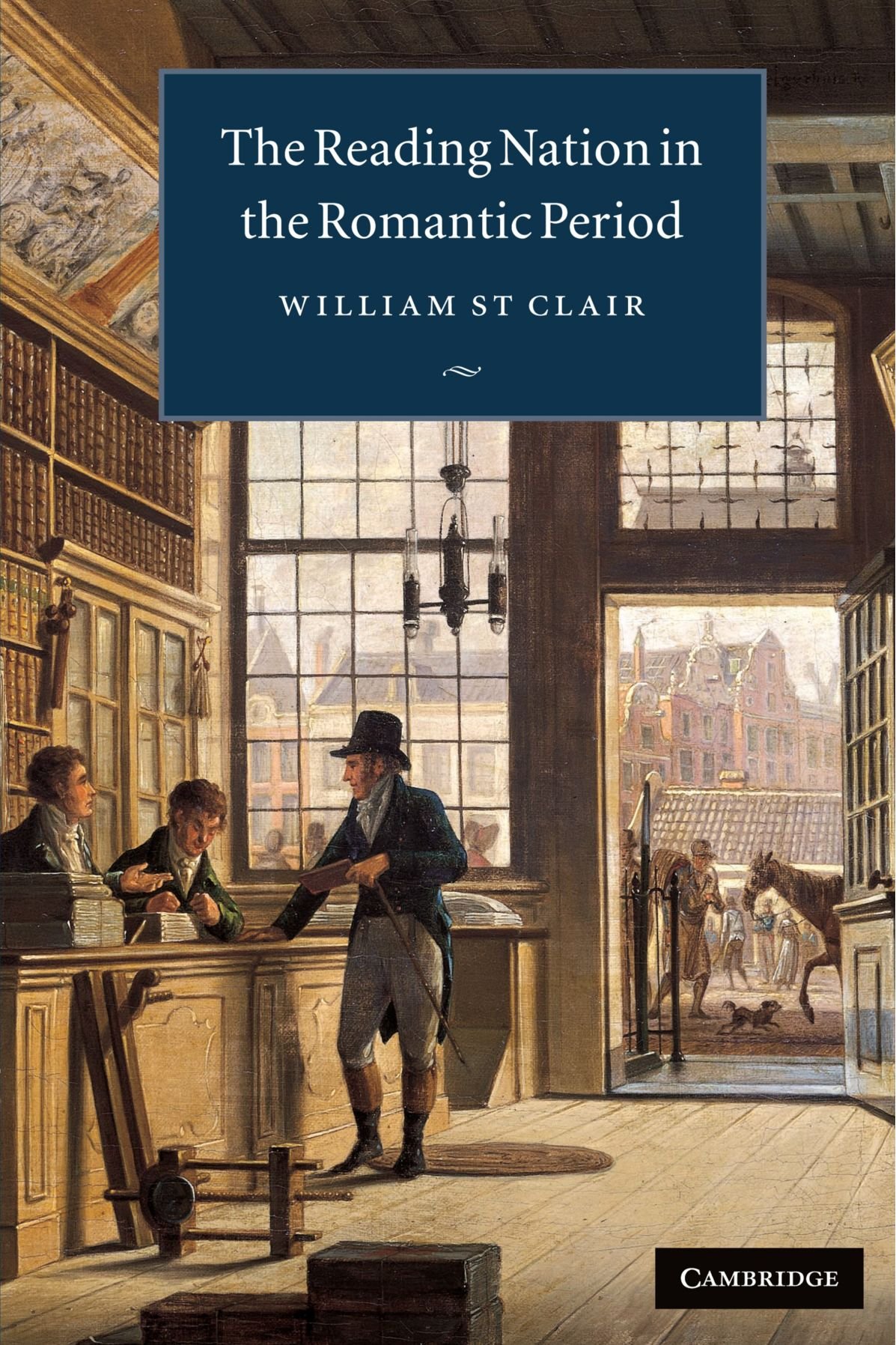 The Books and Borrowing team were all saddened to hear of the recent death of William St Clair. In what follows, three of us reflect on his enduring legacy.

I have a very clear memory of first reading The Reading Nation in the Romantic Period on a train in the Scottish Highlands. There aren’t that many academic books that make for exciting holiday reading, but Reading Nation is one of them: a book worth carrying around to pore over despite its bulkiness. While its influence arises from the usefulness of the arguments it makes, it’s also fun to read. There are a lot of pleasurable flourishes in St Clair’s prose that serve to make his assertions memorable. One of my personal favourites is his claim that ‘the accounts which [John] Murray prepared for [Jane] Austen, in calculating her share of the profits of Emma, are as fictional as the novel’ (p. 164): a comparison that does an excellent job of characterising the tone of Murray’s accounting – not implausible, but on occasion subject to some careful massaging.  I must admit to being slightly dubious about the absolute accuracy of the arresting claim that ‘[d]uring the romantic period the ‘Author of Waverley’ sold more novels than all the other novelists of the time put together’ (p. 221). This would certainly depend on when the period starts and ends, as well as on who you consider to be novelists of the time. However, it’s definitely right in vividly indicating the size of Walter Scott’s readership and the unprecedented scale of his achievement: as we’re finding in the later records we’re examining as part of Books and Borrowing, Scott was an overwhelming influence in the circulating and subscription libraries of the 1820s.

The Reading Nation is a capacious and generous book, in which strong argumentative through-lines prevent its plethora of fascinating subjects from appearing rambling or miscellaneous. It’s an unusual but extremely effective design, the result of a very particular confluence of hard work, expertise and circumstances. When I met William while I was doing my PhD, he told me that he’d had to push quite vociferously for Reading Nation to be published in the form it eventually took, and that Cambridge University Press had eventually agreed to give him a quarter of a million words to use as he saw fit. We should be grateful he was given the freedom to shape the work in a way that preserved the appendices, which make the archival evidence that underpins the book’s arguments widely available for use across the world. I found the tables of sales fascinating – working through them was formative for my doctoral research, which sought to explore the consequences of the systems of circulation Reading Nation surfaced. If most literary works were published in small, expensive editions prior to the late 1820s, how did authors support themselves, who did they see themselves as addressing, and how did they conceive of their positions? I hope I’ve reached some answers to these questions in Living as an Author in the Romantic Period, but I wouldn’t have been able to frame them in same way without Reading Nation.

In person at seminars at the Institute of English Studies or at conferences, William radiated passionate interest. He didn’t do research because he was required to or felt obliged: he did it because he was genuinely, passionately interested in understanding and learning from the past. He was generous with other scholars, offering kind encouragement, incisive comments and the benefit of both his enormous knowledge and his considerable personal collections. His commitment to the liberating potential of open access was a natural development from his investment in questions of justice, his belief in the potential of properly framed economic paradigms and his delight in exploring (and, when appropriate, debunking) the myths of Romantic exclusivity (he was often enjoyably dismissive regarding Wordsworth, who he thought benefited greatly from being in the right place at the right time). I’m sad that I won’t have the chance to catch up with him again about his ongoing work on the political economy of book illustration, but I’m also glad that it remains possible to return to his clear, assertive, sometimes puckish voice as this is captured in his enduring works.

Among St Clair’s published works, The Godwins and the Shelleys: The Biography of a Family (1989) is beloved by many, but his reputation has come to rest primarily on The Reading Nation in the Romantic Period (2004). That book underlies much of the work currently being done by book historians and by others interested in the history of reading. And, over the longer term, it has a chance to be as definitive to Romantic studies as texts like M. H. Abrams’s The Mirror and the Lamp (1953) and Jerome McGann’s The Romantic Ideology (1983). St Clair himself positions the book as a counterblast to the mainstream of literary scholarship, in which selected historical texts are placed in dialogue with one another and read critically for what they might tell us about the past as well as our own sets of concerns. Unfolding an alternative with roots in his experience as a civil servant in the UK Treasury, St Clair describes what he calls a ‘political economy of reading’ that makes fulsome use of publishers’ archives and other under-explored sources to create a quantitative picture of what texts were circulating in the period, and among which economic strata of British society. This includes a significant emphasis on copyright legislation (and its uneven enforcement) as a trigger mechanism for the availability of texts to different individuals in the Romantic period. St Clair’s intention is to establish an evidential basis for historical reading that will enable scholars to make informed observations about the role of texts in shaping what he calls the ‘mentalities’ of the past. This last part, which involves such headline findings as the monolithic Walter Scott’s degree of responsibility for ‘the states of mind that led to the American Civil War and the First World War’ (p. 433), is perhaps the least developed of the book, but the method underpinning it and indeed the large tranche of raw data provided in appendices by St Clair are an invaluable resource. The book ruffled feathers on its first appearance and numerous aspects of its argument have since been disputed and modified, but its grand ambition and overall achievement are beyond question.

I first met William St Clair when he was a Fellow at Trinity College, Cambridge, and was teaching a seminar on the Masters course on which I was then engaged. My own interest in the history of reading probably dates from that time – I wrote a Masters essay on the topic, which sparked further conversations with William which were always engaging, controversial and fun. He bore with my ignorance generously, and opened my mind to alternative ways of thinking about literature, history, politics, economy, and the intersections between them. I’ve never forgotten his kindness to a young scholar at the very beginning of discovering the fascinating world of book history, and many of the ideas I first explored in William’s turret room at Trinity, and over lunch on High Table there, were formative in my PhD work, my first monograph Jane Austen and her Readers, 1786-1945  and, indeed, to this day. The Books and Borrowing project is, at its heart, a response to many of William’s claims in The Reading Nation in the Romantic Period.

The Reading Nation came out as I was in the final throes of writing up my thesis, and I can clearly remember hot-footing it down to the Cambridge University Press bookshop to buy it. At £95, it was a significant investment for a graduate student, but it’s one I have never regretted, since I return to the book at regular intervals, sometimes to check details I’ve forgotten, sometimes to make use of the appendices, sometimes to recommend a particular part of the argument to students or colleagues, and always with pleasure. It’s the first book I recommend to PhD students embarking on Romantic-period projects, and one where I myself always find things to enjoy, and, perhaps equally importantly, to dispute.

William and I both later moved to a great bastion of book history, the Institute of English Studies in London – he as a Senior Research Fellow, and I as a Research Fellow on the Reading Experience Database project. His vivid intelligence, strong sense of purpose, and genuine commitment to the life of the mind were equally inspirational there. William was always an energetic colleague, and sometimes a controversial one, but his kindness to me never failed. Seeing his extraordinary collection of commonplace books at his home was a wonderful privilege, and I am only sorry I won’t be able to return to see them again.

Part of his legacy is, of course Open Book Publishers, the leading independent Open Access publisher in the Humanities and Social Sciences in the UK. With Alessandra Tosi and Rupert Gatti, William co-founded Open Book in 2008, and his involvement reflects his lifelong interest in the cost, price, value and dissemination of books. His own reflections on the similarities between the monopolistic practices of the Romantic publishing industry and today’s can be read here, and a succinct summary of his arguments relating to the political economy of reading is available here.

His loss is a great sadness, but I am grateful that his work remains.