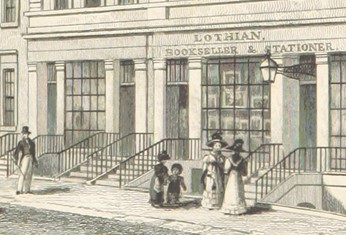 The Books and Borrowing project is working with the National Library of Scotland to conserve and digitise this unique manuscript that K. A. Manley has described as ‘the earliest – and possibly the sole – record of borrowings from a Scottish commercial circulating library’.[1]

A printed catalogue from 1829 for the library also survives. This lists 942 fiction and non-fiction titles, with the emphasis being on novels and periodicals.[2]

The Chambers library is the only for-profit circulating library that will be studied in the Books and Borrowing project – unless more surviving borrowing registers come to light! (For the different types of libraries, see previous Books and Borrowing blog posts by Katie Halsey and Josh Smith.)

Robert Chambers (1802-1871) was the proprietor of this circulating library. He is now best known as an author and, along with his brother William, the founder of a major publishing firm.

Robert was born in Peebles. His father, a cotton manufacturer and merchant, joined Alexander Elder’s circulating library there and borrowed books for his children. When they were old enough, they visited the bookshop and library themselves. They found a selection of English poetry and classics to devour one book at a time. William and Robert read together at the same time to speed the process.[3] Robert was especially bookish. A botched operation on his feet to remove extra digits excluded him from games and he enjoyed studying Latin at the local school.[4]

Family misfortune meant that the Chambers children had to find their way in the world. William and Robert moved to Edinburgh. They settled on books as a way to make their fortunes.

William had a circulating library at Giles’ Buildings in Leith Walk by 1819 which he moved to 23 Broughton Street in 1823.[5] Robert followed suit after unsuccessful attempts to find work as a clerk. By 1821, Robert had his own shop and circulating library at Ronaldson’s Buildings at 32 Leith Walk.[6] His first stock was made up of his own books. He moved his business to 4 India Place, Royal Circus, in 1823. His younger brother James assisted with the circulating library, stationers, and bookshop there.

Alongside his book selling and lending businesses, Robert began to establish himself as an author. He wrote books, journal articles, and poetry. He found success with Traditions of Edinburgh (1824; revised 1868), a collection of historical stories of the city. He travelled Scotland in search of historical stories and poetry which he published in further works throughout the 1820s. In 1831, William and Robert set up the publishing firm of W. & R. Chambers with the aim of providing affordable reading material that was entertaining as well as educational. Their weekly publication, Chambers’s Edinburgh Journal, was launched in 1832 with Robert providing content on a variety of educational subjects. The firm became famous internationally for its dictionaries, textbooks, and encyclopaedias. (For more on W. &. R. Chambers, see Democratising Knowledge at the National Museums Scotland website.) Both brothers ceased running their circulating libraries in 1832 to concentrate on their new venture.

Although the practice emerged in the late seventeenth century, the first business that focused primarily on renting books was Allan Ramsay’s Circulating Library which opened in Edinburgh’s Luckenbooths in 1725. Although subscription and circulating libraries popped up across Scotland, the capital was slow to develop. But by the 1750s and 60s, several were operating in Edinburgh. In 1779, a former farmer called James Sibbald took over Ramsay’s old library and modelled his business on John Bell of London’s ‘British Library’. Walter Scott recalled visiting Sibbald’s Edinburgh Circulating Library in search of old romances, while there catching glimpses of the literary celebrities of the 1780s.[7]

Robert Chambers opened his circulating library at 48 Hanover Street in 1827. It is this library for which the borrowing register and catalogue survives. Its location was conveniently placed for a well-heeled New Town population. Mark Towsey has kindly shared his work on the Chambers borrowing register and catalogue with us, so we have already been able to identify many of the readers. Using the Post Office Directory has allowed some filling in of details such as first names, professions, and full addresses. Chambers’ borrowers were overwhelmingly from the New Town. We are very much looking forward to finding out more about them and what they borrowed from Chambers’ library. We also hope we will be able to trace at least some of them in our other libraries.

The rates for the library were based on the duration of the subscription and the age of the books. These were laid out on the second page of the Chambers catalogue of 1829:

*** Payment made in Advance.

The Chambers brothers were by no means alone in running circulating libraries in Edinburgh in the 1820s. A survey of the Post Office Directory for Edinburgh and Leith for 1829-1830 reveals a further twenty circulating libraries.[8] Most of these were in the New Town and their proprietors often combined their library service with book and stationery sales. Some specialised in specific types of books or services. Davidson and Elgin’s shop at 3 North St Andrews Street, for example, provided a selection of French books alongside its stationery offering from 1829 to 1851.[9] Robert Kinnear at 29 Frederick Street[10] and Robert Ogle at 27 Union Place[11] both distributed stamps. Two of Edinburgh’s circulating libraries of 1828-1829 were run by women. Miss Johanna Tansh’s library – she specialised in children’s books and bibles – was particularly enduring and ran from 1814 to 1870. In the late 1820s, it was at 1 William Street.[12] Mrs Maria Spalding’s library at 5 Warriston Place doubled as a perfume shop.[13]

A few catalogues survive for Edinburgh’s circulating libraries of the early nineteenth century. The National Library of Scotland has catalogues for Robert Kinnear’s (c. 1810), William Wilson’s (1819),[14] Miss Tansh’s (1826), and William Hunter’s (1824).[15] These catalogues came from Sir Walter Scott’s library at Abbotsford so it is possible that Scott borrowed from these circulating libraries.[17] All were within easy reach – a few minutes’ walk – of Scott’s Edinburgh residence at 39 North Castle Street.

We are very much looking forward to finding out more about the books and borrowers of Robert Chambers’ library in the ‘Modern Athens’.