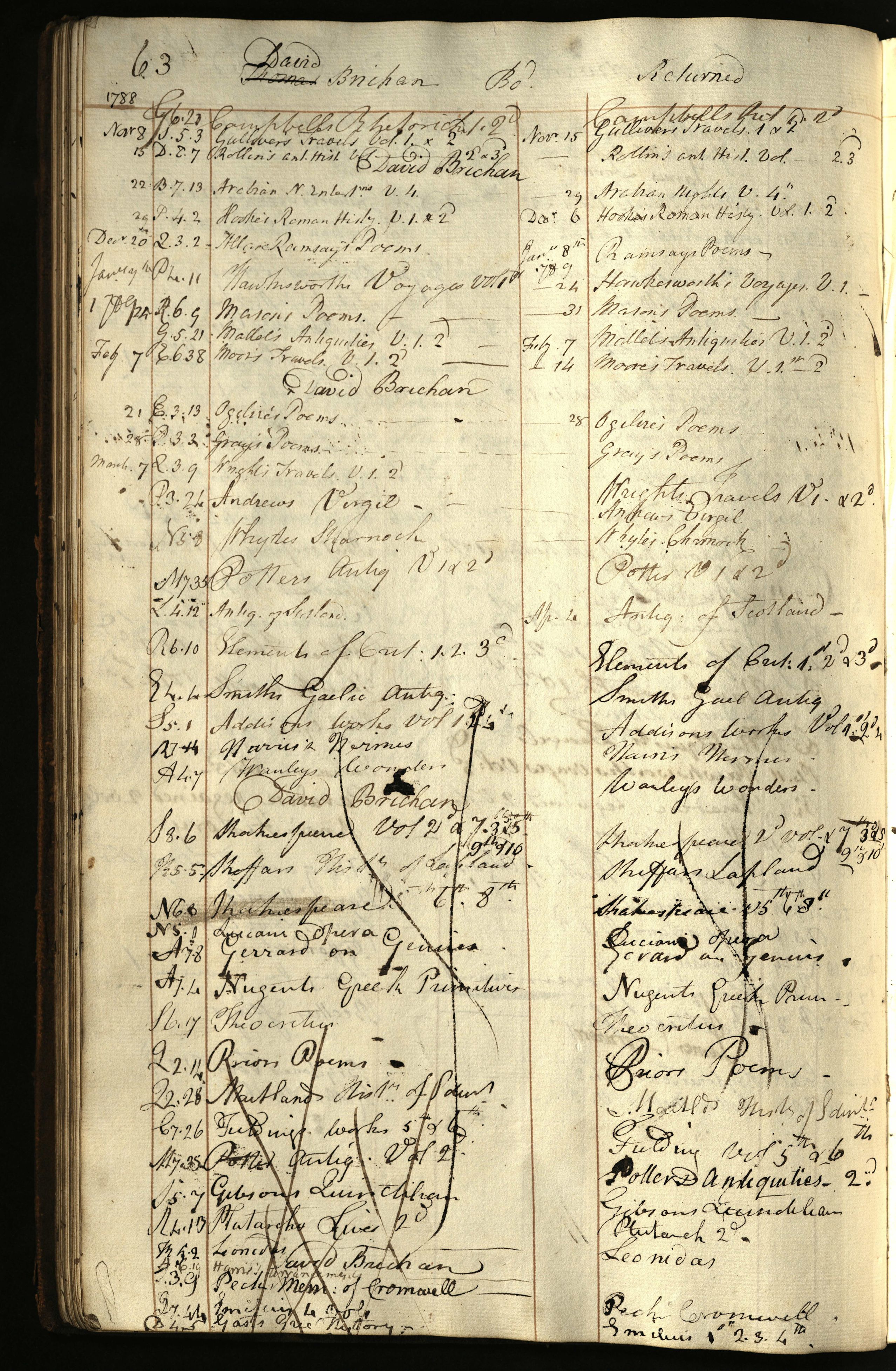 As a student, I admit the thought of undertaking cutting-edge research with the ‘Books and Borrowing’ Project was at first daunting. Funded by a Carnegie Trust Vacation Scholarship, my project concerns itself with the French Revolution and its effects, if it had any, on the reading practices of St. Andrews University students and the wider gentry. Before undertaking my research, I set out a project timetable and work plan, however I increasingly find that my research takes me in various unexpected directions; the work I completed the previous week often guiding my lines of inquiry for the following week. Thus far I have transcribed multiple pages from the St Andrews University library receipt book covering the years 1788 to 1791, as well as undertaking secondary reading around the subject area to contextualise the material I am analysing.

The prospect of transcription may seem to some a tedious and repetitive process. For me however, this task has become almost therapeutic as well as exciting; from the detective work required to find a specific edition of William Mason’s poems to the elation of discovering a completely new book entry which has never been logged in the system before. My most recent page transcription covers the borrowings of St. Andrews University student David Brichan, the son of a staymaker from Dundee. A student from 1788 to 1792, Brichan’s academic schedule was standard for late eighteenth-century students; packed with Latin, Greek, Philosophy, and Ethics. As a result, a lot of Brichan’s borrowings unsurprisingly are works about Classical Greece and Rome, such as Hooke’s Roman History, Charles Rollin’s Antient History – volume the second covering the arts and sciences of the ancients, Gast’s Greek History, Nugent’s Greek Primitives detailing the Greek language, as well as Potter’s Antiquities of Greece – volumes first and second (the latter borrowed twice). This is also supported by large Greek and Roman epic stories like Robert Andrews’ Englished Virgil and Glover’s Leonidas. The study of classical material was seen as culturally elite; thus, it became standard in upper class education systems and curriculums both in England and Scotland. Interestingly, Brichan is exploring the world of the classical through modern interpretations, suggesting that he not only intended to immerse himself in the classical world but also engage with modern scholarly debates and discoveries about the ancient past.

However, this ledger indicates that Brichan deviated from this to an extent, also borrowing Rollin’s third volume of Antient History which covers the history of the Egyptians, as well as both volumes of Paul Henri Mallet’s Northern Antiquities, a work which presents a comprehensive view of Norse mythology in English. This variation from Greco-Roman classical antiquity not only represents the rise in the European literary scene of a cultural interest in myths and legends of the Nordic world, but also Brichan’s interest in his Saxon ancestry and Scottish history. This is also evident in his borrowings of the Maitland’s History of Edinburgh, Antiquities of Scotland (possibly William Maitland’s edition), John Smith’s Gaelic Antiquities, and a collection of poems by the Scottish poet Allan Ramsay. Brichan, as a student borrower, not only withdraws texts which relate to his academic passions, but he also has a deep interest in his own history and Scottish identity. As Mark Towsey outlines within The Edinburgh History of the Book in Scotland, many eighteenth-century readers identified England as ‘other’ and harked back to an independent Scotland, this in turn allowed Scottish readers to interpret the world around them, particularly Scotland’s literary history.[1] Although it would be naive to declare this student neglected the works of English writers (Shakespeare’s works are borrowed twice), I argue that through his borrowings Brichan attempts to connect with his own Scottish history, taking advantage of the generous book borrowing rights given to St Andrew’s University students to go beyond the set classical curriculum. In addition to this, Brichan’s borrowings also show him travelling throughout both time and space; like many students, trying to grasp the world before entering it as a graduate.

Additionally, the increasing popularity of novels in the late eighteenth-century period is demonstrated in Brichan’s borrowings; from Henry Fielding’s comic novels (volumes fifth and sixth) to Swift’s satirical masterpiece Gulliver’s Travels. The Legal Deposit Act introduced in 1710 was partly responsible for this introduction of more modern literature into university libraries. By 1800, about sixty per cent of St Andrews’ collection consisted of legal deposit books.[2]  The Act thus diluted a heavily Latin collection with the novel more specifically challenging popular classical literature. If Brichan is to be taken as a general representative of the student community, it could be argued that although traditional ‘highbrow’ classical and Latin texts still withstood the test of time, the emergence of the novel genre and novel reading at the end of the eighteenth-century also extended to the student population.

It is important to stress however that although borrowing registers show that library users checked books out of institutions, it does not necessarily mean that they read the book. Nor does it tell us, as Towsey reiterates, what the reader thought of the book, whether they liked or disliked it.[3] What it does allow us to do however is statistically evaluate what books were popular during the period (or surprisingly unpopular). The ‘Books and Borrowing’ Project also allows scholars a glimpse into eighteenth century reading practises and experiences, understanding how books came to represent a national identity in Scotland and the roles they played within a time of progress, reason, and enlightenment.

I’m greatly looking forward to continuing onward in my own exploration of the reading student and gentry population in St. Andrews. As my transcription continues, hopefully I will start to see more apparent trends within the borrowing registers, specifically patterns which reflect ideas of revolt and upheaval which possibly align with the 1789 revolution in France. I have loved working on the ‘Books and Borrowing’ project and feel very fortunate to be part of such great research team.

See you in my next blog!
Liv

[1] Mark Towsey, ‘Reading in the Scottish Enlightenment’, in The Edinburgh History of the Book in Scotland. Volume 2: Enlightenment and Expansion 1707-1800, ed. by Stephen W. Brown and Warren McDougall (Edinburgh: Edinburgh University Press, 2011), p. 432.