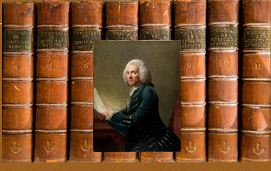 Dr William Hunter (1718-1783) left his collections to his nephew Matthew Baillie who had the use of them with the understanding that they would eventually be given to the University of Glasgow. By the early nineteenth century, Baillie had established his own medical practice and he and his fellow trustees set in motion plans to transfer Hunter’s bequest from London to Glasgow. This inheritance included books, manuscripts, prints, drawings, medals, coins, anatomical specimens, fossils, shells, corals, preserved birds, insects, and mammals, dried plants, and curiosities from the South Seas. In return, the university was to provide a building to house the collection and ‘to promote the Utility of the Collection to the Students in the University of Glasgow and to the Public in general’ (Transcript of William Hunter’s Scottish will (22 April 1783), GUA 45182, f. 1).[1] 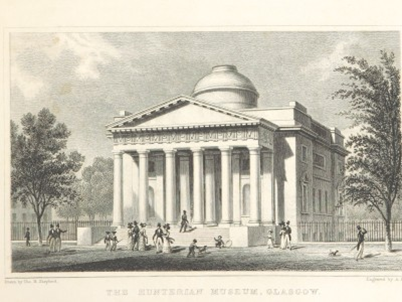 The Hunterian Museum designed by William Stark opened in 1807. It housed, along with the rest of Hunter’s collections, over 10,000 printed volumes and about 650 manuscripts. These are now part of the University’s Archives and Special Collections. The modern archive also includes the borrowing register from the earliest years of the books and manuscripts from 1808 to 1852.[2] Our project will focus on the entries up to 1830.

When Julie Gardham, Senior Special Collections Librarian , offered the Books and Borrowing Project a digitisation of  the borrowing register, we were delighted to add the Hunterian Museum Library (MS 25) to our collection of libraries.

For me, this is a reunion of sorts: Julie was my boss when I was the project manager for ‘William Hunter’s Library: A transcription of the early catalogues’ a couple of years ago. That project focussed on Hunter’s ownership of books now in the library’s Hunterian Collection as determined by the catalogues Hunter kept during his lifetime and the trustees catalogue put together after his death.

Now we have a chance to analyse what happened to the books after they arrived in Glasgow. Were they used for the good of the students and public of Glasgow?

Professors of the university are, unsurprisingly, the most prevalent borrowers.

Dr Robert Davidson was the most active user of the collection up until 1830. Between 1808 and 1828, he borrowed 61 items from the Hunterian Museum Library. His first loan, Catalogue of the Library of the Writers to His Majesty’s Signet of 1805 (Sp Coll Hunterian Q.3.1), presented to the library in 1808, shows the intention that the Hunterian Museum’s book collection would continue to grow after its arrival in Glasgow. Davidson went on to borrow a variety of prints and books on various subjects including law, botany, and zoology over the next twenty years.

The most borrowed title was Horti Indici Malabarici (Sp Coll Hunterian W.1.5-16). Various parts of this twelve volume work on the plants of India’s Malabar Coast were borrowed by the Regius Professor of Botany, Dr William Jackson Hooker, between 1823 and 1828.

Also popular among the Glasgow professors was Recueil d’estampes d’après les plus célèbres tableaux de la Galerie royale de Dresde (Sp Coll Hunterian Az.4.3-4),  which was borrowed fifteen times between 1812 and 1828. This collection of prints was one of several regularly borrowed by the Glasgow professors in the early nineteenth century who also favoured Hunter’s prints by Hogarth, Bartolozzi, and Thomas Major.

External users also had access to the collection as we see from an entry in the borrowing register date 18 October 1808:

The Trustees on the Hunterian Museum allow M.r Gilbert Hamilton the loan of the Catalogue of the Books in the Library and authorise M.r Mylne, Dr Cumin and M.r Davidson to give him any printed Books which he may require from it.

Hamilton was a metal worker who went on to borrow four books on coins and coinage after consulting the catalogue.

By the time the University of Glasgow moved from its town centre location to its new location in Gilmorehill, some thought Hunter’s books had outlived their usefulness as tools for education.  Fortunately, the collection was kept intact and it continues to provide sources and inspiration for research, including the current ‘Books and Borrowing’ project.