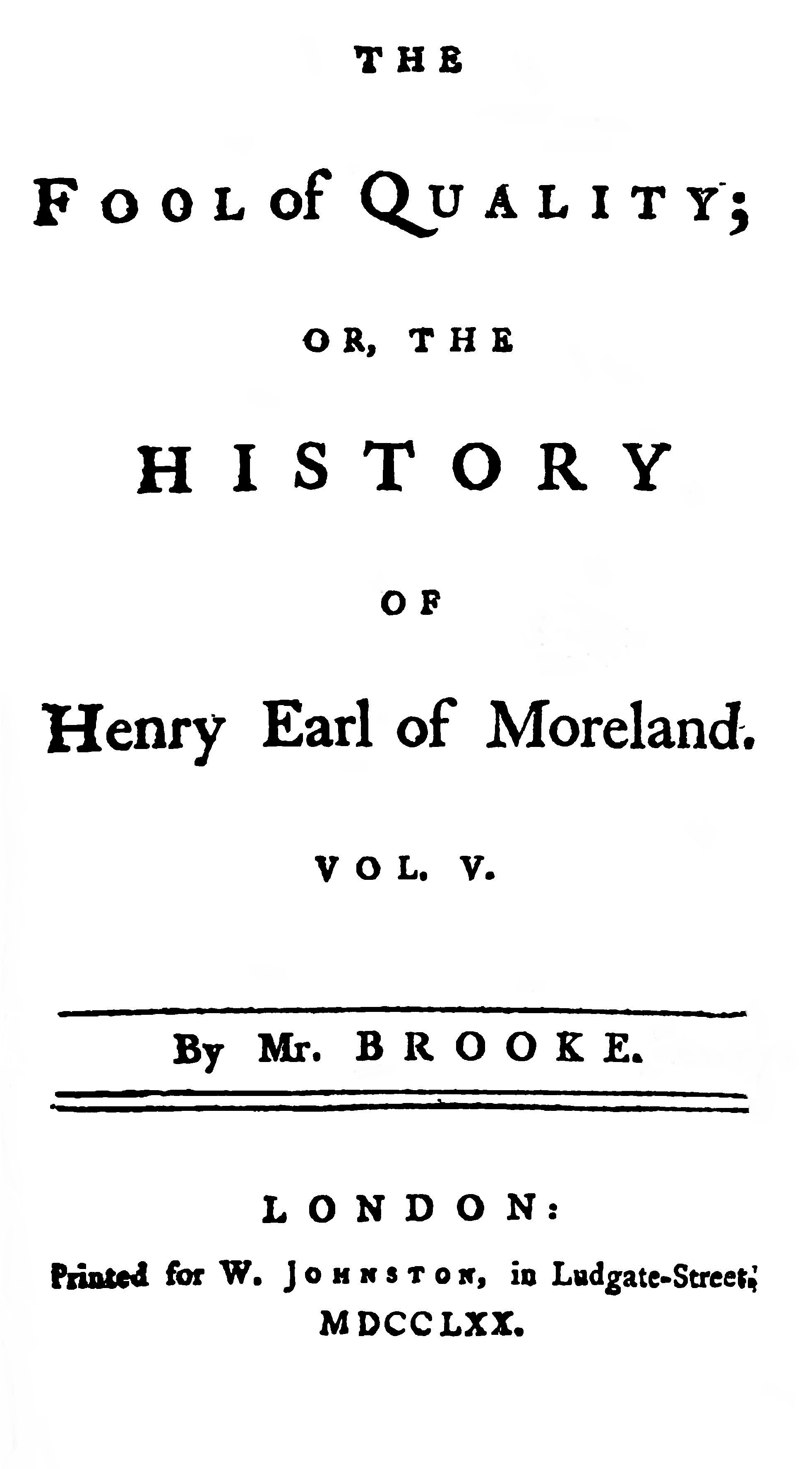 In each of our weekly meetings for Books and Borrowing, we talk a bit about what we’ve been noticing in the registers – strange anomalies, popular books, quirks of record-keeping practices and so on. Sometimes the popular books becoming apparent from the data we’re transcribing are relatively predictable: for example, the works of Charles Rollin – which our pilot projects found to be central to an Arts education in the early part of the period we’re examining – continue to appear prominently in records from the 1750s, 1760s and 1770s. However, in our meeting last week, Alex Deans mentioned that he’d been seeing a lot of borrowings at Westerkirk for Henry Brooke’s lengthy sentimental picaresque novel The Fool of Quality, first published in five volumes between 1765 and 1770 (the likely holding at Westerkirk is the duodecimo edition of 1792). Glancing at our database, this novel appears to be the fourteenth-most-borrowed work from Westerkirk as things currently stand (although this will undoubtedly change as more records are added to the system). It’s behind the many volumes of The Edinburgh Encyclopaedia and Jane Porter’s The Scottish Chiefs (which Alex discusses here), as well as Frances Burney’s Cecilia and various historical and religious works, but nevertheless seems to have maintained a strong hold over the minds of Westerkirk’s reading community during the 1810s as one of the most popular works of fiction circulating from the library.

This interested me for several reasons. My own previous encounters with The Fool of Quality had been in the records at St Andrews, when I was conducting a study that became one of the initial pilots for Books and Borrowing. As part of this work, I took slice samples from the St Andrews receipt books for the years 1750 and 1775 and the academic session 1798-9 (because of deteriorating record-keeping at the end of the eighteenth century, parameters for an 1800 sample weren’t easy to lay down). In the St Andrews sample from 1775, The Fool of Quality was very prominent, along with Rousseau’s Julie, or the New Heloise (Rousseau has been identified as a major influence on Brooke) and the anonymous Anecdotes of a Convent. Our ongoing research has given some early indications that it was popular elsewhere at this time: the work Kit Baston has completed so far on the Edinburgh student records shows that five borrowers worked their way through four volumes of the novel in the early 1770s (perhaps indicating that the fifth volume – a late addition to Brooke’s plan – wasn’t part of the copy held in Edinburgh at that time). In my late century sample, though, St Andrews’ student readers had moved on, with the most popular novelists being Charlotte Smith and Ann Radcliffe. Only Henry Fielding really displays a sustained presence as a novelist across the two samples.[1]

My own expectations regarding The Fool of Quality thus placed its popularity in the 1770s, tailing off from that point as newer fictions took its place as common currency in reading communities. Alex’s findings at Westerkirk made me reflect on why I’d made those assumptions. In part, I think this is because of the way we’re conditioned to think by conventional literary histories, which tie books in tightly with the moment of their first publication. One of the most important roles that we hope the Books and Borrowing database will play is showing the enduring influences of certain works and the belated receptions of others. While modern literary histories might associate 1798 most strongly with the publication of Lyrical Ballads, for example, St Andrews students had no access to the book at that time, and were far more likely to be reading recent fiction than indulging in poetry of any kind.

However, I’d also assumed (wrongly) that The Fool of Quality fell slowly out of circulation over the course of the latter half of the eighteenth century by generalising from my experience working with a very particular reading community: the young students at St Andrews (most of whom were in their teens or early twenties). It is clear now that in other communities, The Fool of Quality remained a popular recreation. As Alex’s research on Westerkirk shows, it was being keenly read in the Borders during the 1810s. In addition, Gerry McKeever’s work on Wigtown demonstrates that it was pretty popular there: parts of the novel were borrowed 23 times during the period in the 1790s for which records survive, and volumes circulated 62 further times during the late 1820s and the 1830s. Once those numbers are considered as a proportion of the total borrowings for those periods, it becomes apparent that its popularity dropped a bit, but it appears to have held its own among Wigtown’s Scott-loving readers.

The apparent differences between receptions in St Andrews and Wigtown and Westerkirk makes me wonder whether the Books and Borrowing database might eventually be able to trace the differing reading habits of different generations. After all, some of the older borrowers in Wigtown and Westerkirk in the early nineteenth century would have been born around the same time as student readers in St Andrews in the mid-1770s. Perhaps some of these readers were returning to a book they had enjoyed when they were younger, but which had slipped off the radar of the student community at St Andrews, which had access to more recent and fashionable works due to the university’s copyright privileges. This is hard to prove at this point, but does suggest that further prosopographical analyses of different library communities might bear interesting fruit.

The popularity of The Fool of Quality also suggests some of the ways that Books and Borrowing might help us reconfigure our histories of the novel. The modern profile of The Fool of Quality is very low. It is mentioned in passing on a couple of occasions in the 700-page second volume of the Oxford History of the Novel in English, covering British Fiction between 1750 and 1820, and in one essay, Helen Thompson provides a brief appraisal:

For many authors, sentimental masculinity is nourished in isolation from novels, urban leisure, and philosophy and the resulting vices of affectation, fashion, and scepticism. Henry Brooke’s The Fool of Quality (1766–70) envisions the extreme case of an aristocratic boy who, raised by peasants to ‘run about, mother-naked, for near an hour, in a frosty morning’, is so unable to abstract his impressions into words that his mother declares him ‘positively an ideot; he has no apprehension of persons or things’ (1.47). Because he has been neither ‘physicked into delicacy, nor flattered into pride’ (1.43) and because he seems to lack ‘any kind of ideas’ (1.47), juvenile Harry channels the ‘sentiments’, one tearful onlooker testifies, that ‘heaven … inspires’ (1.57): ‘The language of true love is understood by all creatures, and was that of which Harry had, almost the only perception’ (1.52). By linking illiteracy to an extra-discursive virtue that extends to ‘all creatures’, Brooke offers a potent but unsustainable deployment of Rousseauvian savagery, perhaps especially because little Harry manifests his goodness by beating up the effeminate, overly chatty young nobles with whom he is placed in contact.[2]

This passage and its wider contexts place The Fool of Quality as a relatively minor part of the ‘Sentimental Fiction of the 1760s and 1770s’, but the evidence from borrowing registers indicates that this doesn’t really reflect its status both in those decades and in the early nineteenth century. Modern students and scholars are probably most likely to encounter sentimental fiction in the form of Laurence Sterne’s A Sentimental Journey (borrowed fourteen times from Westerkirk and eight times from Wigtown in the data prepared thus far) or Oliver Goldsmith’s The Vicar of Wakefield (borrowed seventeen times from Westerkirk and nine times from Wigtown). However, our data indicates that in the communities we have records for,The Fool of Quality may have been more popular than these prominent works, even after accounting for its five-volume length. Such results must be treated with caution – it is possible The Fool of Quality was borrowed from libraries precisely because it was long and therefore more expensive. Nevertheless, it certainly seems that people read it in sustained manners over a sustained period.

The novel’s length makes it an awkward one for modern critics. The Fool of Quality is not Thompson’s main subject in her essay, but it is still notable that she only cites from the early pages of Volume 1 of a work well over 1,000 pages long in total. Other critics have also found shorter sentimental texts more natural loci for discussions. A search for “Vicar of Wakefield” in the MLA Bibliography returns 142 results. “Sentimental Journey” returns 367. “Fool of Quality” returns nine, and most of those articles feature it either in a supporting role or as a resource for a famous figure (John Wesley abridged the novel, Thomas Day admired it, and Samuel Taylor Coleridge annotated it).

This in part reflects changing reading environments: eighteenth-century novels are now most likely to be encountered as parts of university curricula or in series like the Penguin Classics. The Fool of Quality would be very difficult to set as a course text, in part because it would strain the spine of a Classics volume. While a few very long eighteenth-century novels (most notably Samuel Richardson’s Clarissa) have relatively high profiles, others have now been edited out of the picture. There may be some solid reasons for this: perhaps Brooke’s novel isn’t a very good book by modern aesthetic standards. However, if this is the case, that makes it potentially extremely valuable as a gauge of change – if we don’t like it now, but readers liked it then, how have expectations shifted?

The eclipse of The Fool of Quality and other works like it means that we miss something of the experience of reading in our period that renewed attention might allow us to reconstruct. In his post on Jane Porter, Alex relates nineteenth-century novel reading to catching up on long TV series. This is a good analogy to employ for Brooke’s text, I think, and might usefully contextualise some of the traits that have been ascribed to it. What the early-twentieth-century Cambridge History of English and American Literature described as an ‘extreme looseness of structure’ might make more sense if we think of the novel not in terms of a singular narrative unity, but as a series of deliberate episodes.[3]  Such rhythms probably suited readers who dipped in and returned.[4] The novel’s Parsifal-like central character adds a stable element that such readers could use to orient themselves in its various scenarios, his characteristics perhaps working in much the same way as the stable characteristics of central characters in sitcoms.  What might seem like poor design by later standards might therefore be a means of establishing a rhythm highly congenial to the needs of older readers. If we are to understand the full range of ways that eighteenth-century readers interacted with texts, we might do well to be more attentive to such rhythms, as well as to the protracted stretches in the sun enjoyed by works that we now relegate to footnotes.

[1] For a fuller write up of these samples, see Matthew Sangster, ‘Copyright Literature and Reading Communities in Eighteenth-Century St Andrews’, Review of English Studies, 68:287 (2017), 947-67.

[4] For more on such habits, see Christina Lupton, Reading and the Making of Time in the Eighteenth Century (Baltimore, MD: Johns Hopkins University Press, 2018).