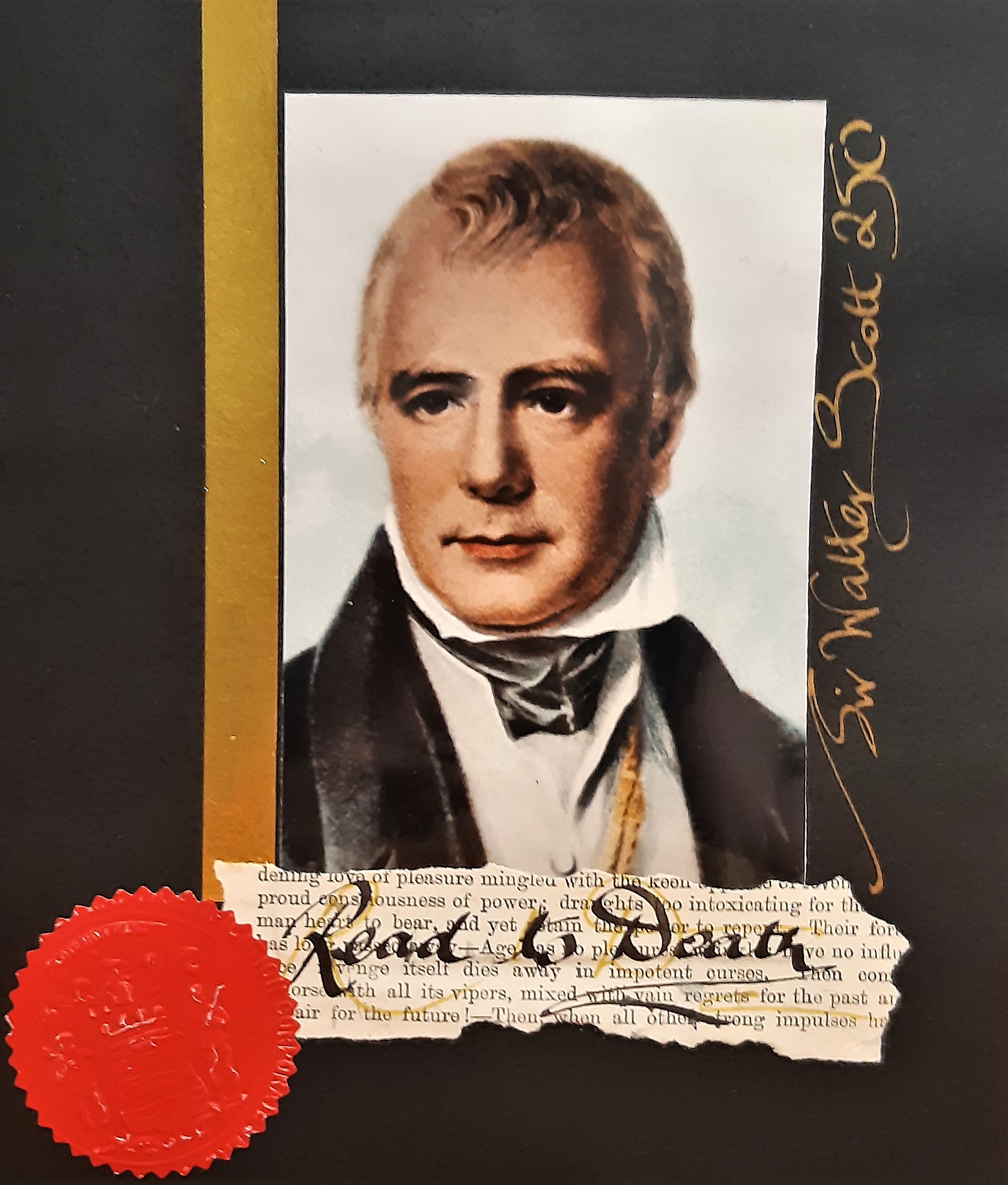 Innerpeffray Library has now re-opened to visitors! After a longer than usual winter closure period due to lockdown and Covid-19 restrictions, you can once again travel to rural Perthshire and see the first free public library in Scotland – and its new exhibition. Celebrating the 250th anniversary of the birth of Sir Walter Scott, ‘Read to Death’ is sponsored by the Friends of Innerpeffray Library (FOIL) and explores some of the links between Innerpeffray Library and Scottish literary legend Walter Scott.[1]

On Thursday 3 June, Innerpeffray Library and FOIL hosted an exclusive opening event for the new exhibition, combining a private first look at the collection items on display with an introduction from Keeper Lara Haggerty and a selection of Scott-themed readings and songs from two fantastic performers: Peter Grant and Alan Caig Wilson, who respectively sang Jock o’ Hazeldean and Bonnie Dundee, and read selections from Waverley and The Lay of the Last Minstrel.

So, what are the connections between Innerpeffray Library and Walter Scott? I would hate to spoil the exhibition for you as it is absolutely worth a visit in person, but here are some highlights:

In 2013, a considerable collection of rare books was gifted to Innerpeffray Library by bibliophile Janet Burns Saint Germain, who had amassed a large number of Walter Scott books and other Scott paraphernalia. Many of Scott’s earliest publications no longer survive in the library, having been literally ‘read to death’ – a concept which provides the name for this year’s exhibition. Some of the rarest books within the collection are first edition Walter Scott books still in their ‘drab boards’ – in order to keep the price of books low and to be able to get books into readers’ hands more quickly, publishers often produced books in very fragile, and intended to be temporary, ‘drab boards’. These books were intended to be rebound by the buyer, in whatever style they wished, often matching the rest of their library. Due to the incredibly fragile nature of these books, described by Lara as having the consistency of tissue paper that has been wet and re-dried (they literally crumble to the touch), these books are only ever displayed within their original box. Also among Saint Germain’s collection and now on display is a letter in Walter Scott’s handwriting, in which Scott complains that during his long illness, his doctors would only allow him one half-glass of whiskey per day. Absolutely unacceptable! Additionally, we recently discovered that within the letter, Scott quotes Robert Burns’ ‘Elegy on Captain Matthew Henderson’: “And ne’er gude wine did fear, man.” Beyond Scott’s reasonable complaint about his alcohol intake, it is delightful to see him referencing another Scottish literary giant in his personal writings. It is astonishing that these items have survived to the present day, so get thee to Innerpeffray to see them as soon as possible!

The Innerpeffray Library Borrowers’ Registers are an extremely valuable source for book historians – unique manuscript records which detail the books borrowed from the library and by whom between 1747 and 1968. For the current exhibition, the ‘Borrower of the Month’ section of the library focuses on James Mitchell, a local resident from Strageath (a farming settlement directly across the river from Innerpeffray) who tutored the young Walter Scott and his siblings in writing and arithmetic. Between 1774 and 1778, Mitchell borrowed twenty books from Innerpeffray Library, including one of the most popular books in the library’s collection before 1800 – William Robertson’s The History of the Reign of the Emperor Charles V (London, 1769). 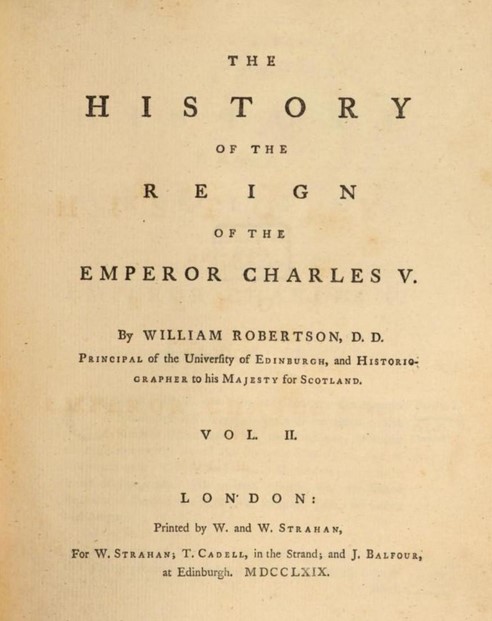 I was delighted to be able to contribute an additional connection to Scott from my own PhD research into the Innerpeffray Library Visitors’ Books. While transcribing the first volume of visitors’ books, I came across two names which stuck out to me: T. and G. T. Scott Huxley.

On 5 June 1874, Thomas Scott Huxley (1822-1898) visited the library, writing his location as St Andrew’s Church in Canterbury (where he was Rector). Just over a month later his son, George Thomas Scott Huxley (1859-1940), visited on 25 July – also listing his location as Canterbury. Passing this information onto the Innerpeffray team, expert researcher and volunteer Gillean Ford was able to confirm that these two men were indeed relatives of Walter Scott, descended from Walter Scott’s brother Thomas (1774-1823) through his daughter Jessie (Walter Scott’s niece; 1801-1870). You can read a transcription of a letter from Scott reacting to the news of his niece getting married to Captain Thomas Huxley (d.1826) through the Edinburgh University Library Walter Scott Digital Archive here and below. It seems likely that the Huxley family were spending their summer holiday in the area, and Thomas Scott Huxley enjoyed his visit to Innerpeffray enough to recommend it to his son, who visited the following month. Although Innerpeffray did not start recording the names of visitors until 1859 and as such we have no evidence to say whether Walter Scott himself ever visited (Scott died in 1832), it is great to be able to see that his descendants came to see the library.

Dear Tom, – I received yesterday your very acceptable letter, containing the news of Jessie’s approaching marriage, in which, as a match agreeable to her mother and you, and relieving your minds from some of the anxious prospects which haunt those of parents, I take the most sincere interest. Before this reaches you, the event will probably have taken place. Meantime, I enclose a letter to the bride or wife, as the case may happen to be. I have sent a small token of good-will to ballast my good wishes, which you will please to value for the young lady, that she may employ it as most convenient or agreeable to her. A little more fortune would perhaps have done the young folks no harm; but Captain Huxley, being such as you describe him, will have every chance of getting forward in his profession; and the happiest marriages are often those in which there is, at first, occasion for prudence and economy…

In addition to tracking down more information about the Scott Huxleys, Gillean also managed to get in touch with some of their living descendants who live very close to Innerpeffray today. What a small world! As well as viewing the visitors’ book itself with its names and signatures, you can also see photographs of Thomas and George supplied by their family – this is a great example of the kind of genealogical research that will be possible once the information in the visitors’ books is more accessible.

[1] Due to ongoing pandemic restrictions, the limited guests were split into two groups – Ivanhoe and Waverley – to explore the exhibition and view the performances with required social distancing (thanks to Lara’s trusty tape measure!). Attendees also wore face masks throughout the indoor parts of the event and regularly washed and/or sanitised their hands. This first in-person event since 2020 required considerable planning to make it as safe as possible, but it was definitely worth the effort as the night was a huge success. It is so brilliant to actually see and speak to people in the library again!